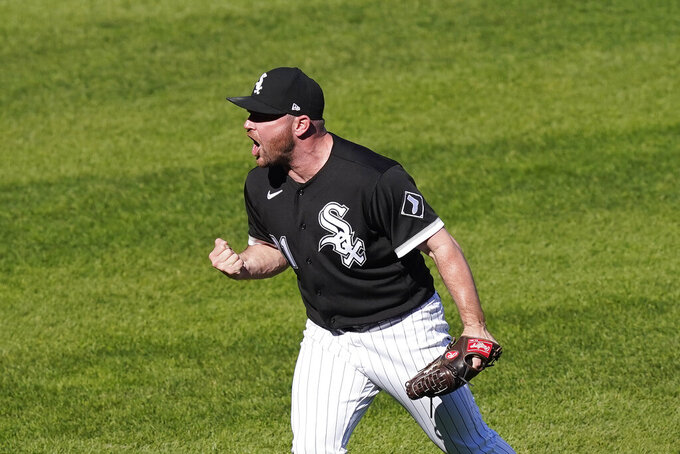 CHICAGO (AP) — Tim Anderson and Jake Lamb homered, Billy Hamilton made a leaping catch at the wall to end a bases-loaded threat and the Chicago White Sox beat the Minnesota Twins 4-2 Thursday for their sixth straight win.

Lance Lynn (4-1) struck out nine in five innings for Chicago, which has won seven of eight while sweeping two straight series. Liam Hendriks retired the last five Minnesota batters for his seventh save in nine chances.

“It feels good to be in a position to whoop on the other guys in the division and keep pushing,” Anderson said after the White Sox swept a series from the Twins for the first time since 2016. “This is a great confidence builder.

“Hopefully we remember what this feels like and keep going.”

Max Kepler homered for the Twins, who have lost four straight and eight of nine to fall 10 games behind the AL Central leaders. Michael Pineda (2-2) slowed down a White Sox offense that had scored at least nine runs in four straight games but lost after Minnesota failed to cash in on a pair of bases-loaded chances.

Anderson drove Pineda’s first pitch of the game into the left field stands and Lamb hit the top of the right-center field wall in the third. Andrew Vaughn and Yermín Mercedes added RBI singles in the sixth and eighth.

Trevor Larnach scored on Lynn’s fourth-inning throwing error and the Twins then loaded the bases but failed to take the lead after Hamilton leaped a foot from the left-center wall to grab Kyle Garlick’s drive.

“It was frustrating,” Twins manager Rocco Baldelli said of the missed opportunities. “We didn’t get hits with runners in scoring position.”

The fleet-footed Hamilton also ranged into deep left-center field for Luis Arraez’s line drive with two on and one out in the eighth.

Lynn loaded them again an inning later by walking Larnach but got himself out of the jam when Mitch Garver struck out looking at his 111th and final pitch. Lynn allowed two hits with three walks and won his third straight start.

“We’re winning games in multiple ways and that’s what it’s all about.”

Pineda allowed four hits and three walks while striking out a season-high seven.

Kepler homered off José Ruiz in the eighth.

Both clubs announced plans to allow more fans to attend games in coming weeks. The White Sox will expand from 25% to 60% capacity beginning May 24 and also will open COVID-19 vaccination sites in the park. Fans who receive the single-dose Johnson & Johnson vaccine at the site will receive a food and merchandise credit.

The Twins will raise available seats from 25% to 60% through the end of May, move to 80% in June and open all seats in July. The announcement came after Gov. Tim Walz outlined a three-step timeline to end the state’s pandemic restrictions. Fans in both cities still will be required to wear face coverings in the ballparks.

Twins: Garver curled up behind the plate after being struck in the right knee by reliever Jorge Alcala in the seventh but remained in the game. ... CF Byron Buxton, who is one week into his weeks-long recovery from a strained right hip, plans to begin swinging a bat this weekend.

White Sox: Lynn appeared to be struck in the right forearm by Kepler’s grounder in the fourth but stayed on the mound after being examined by a trainer. He said a postgame X-ray showed no deep-tissue injuries. ... RHP Michael Kopech will make his third start of the season in the nightcap of Friday’s split doubleheader against visiting Kansas City. Manager Tony LaRussa said a pitch count won’t be an overwhelming factor for Kopech (2-0, 1.61), who missed the last two seasons due to Tommy John surgery and COVID concerns. The previous two starts also came in doubleheaders.

White Sox: RHP Lucas Giolito (2-3, 4.54) faces RHP Brad Keller (2-4, 7.31) in the opener of Friday’s twinbill. The Royals will name a starter for the second contest after this afternoon’s game at Detroit.