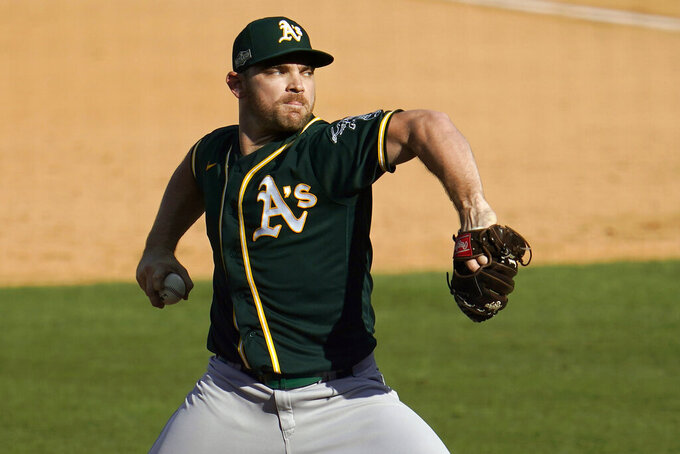 FILE - In this Wednesday, Oct. 7, 2020 file photo, Oakland Athletics pitcher Liam Hendriks throws against the Houston Astros during the ninth inning of Game 3 of a baseball American League Division Series in Los Angeles. Liam Hendriks is taking nothing for granted. The Chicago White Sox's new closer insisted he has to earn the job this spring and he's just another reliever until he does. Except, of course, he's not just another reliever.(AP Photo/Marcio Jose Sanchez, File)

CHICAGO (AP) — Liam Hendriks is taking nothing for granted.

The White Sox landed one of baseball's best when they signed Hendriks to a $54 million contract in January, a major addition for a team with championship aspirations.

“Until anything happens, I’m just a reliever on this team,” Hendriks said. “I need to make sure that I earn that spot. There’s never going to be a guarantee of me doing anything, whether it be working the ninth or anything like that. My guarantee is me going out there and pitching and putting my best foot forward and hopefully winning that role.”

Manager Tony La Russa can appreciate that attitude. It reminds him of what he saw from Albert Pujols during their 11 seasons together in St. Louis.

“That's the attitude you want,” La Russa said. “If you see him in person, how strong he is, I'm not going to disagree with him. Let him think he has to make it. Albert, for 11 years, would always say he's got to make the club. The way he worked gave you that impression, and I think that's what Liam means.”

Hendriks established himself as one of baseball's best relievers during his five years with the Oakland Athletics before joining the White Sox.

The 32-year-old right-hander earned his first All-Star invitation in a breakout season in 2019, with 25 saves and a 1.80 ERA. Hendriks dominated again in 2020, finishing second in the majors with 14 saves and a 1.78 ERA in the pandemic-shortened year. He struck out 37 and walked just three in 25 1/3 innings.

Hendriks was on the mound for the final out when Oakland knocked out Chicago in Game 3 of their wild-card series. Now, he's trying to help the White Sox capture the biggest prize of all.

Chicago tied for second in the AL Central last year after seven straight losing seasons and reached the playoffs for the first time since 2008. They then hired La Russa, the Hall of Famer, for a second stint as their manager to replace Rick Renteria. They also beefed up their rotation by acquiring Lance Lynn in a trade from Texas, besides adding Hendriks to their bullpen.

With a deep lineup led by AL MVP José Abreu and Tim Anderson and ace Lucas Giolito at the top of the rotation, the White Sox believe they are poised to challenge for their first World Series championship since 2005.

The signing of Hendriks last month only added to their optimism. He is due $39 million over the next three seasons, including a $1 million signing bonus. The White Sox hold a $15 million option for 2024 with a $15 million buyout that would be paid in 10 equal installments from 2024-33.

Hendriks seems unlikely to coast with the contract. He insisted there is another level for him to reach, that he hasn't tapped his full potential.

“If I ever become satisfied, it means I'm going backwards,” he said. “I constantly think I can do better. I constantly think there's certain areas to work on. I think regardless of numbers, there's always something you can get better and that can improve your season and improve you as a team, whether it be on the field, off the field, as a teammate, as a human being. There's always something to move forward, push forward to.”

Hendriks already has learned one thing in camp. He tipped a pitch that his new catcher, Yasmani Grandal, hit for a homer in Game 2 last fall.

“I want to make sure when he's on the mound we can work on all the different variables that we need to work on now and clean everything and we can go from there,” Grandal said.

Grandal was “excited” to add a closer of that caliber who can pitch multiple innings and embraces a heavy workload. Hendriks made it clear to La Russa he doesn't want too many days off.

“I want the ball whatever situation, whatever time it feels like,” Hendriks said.