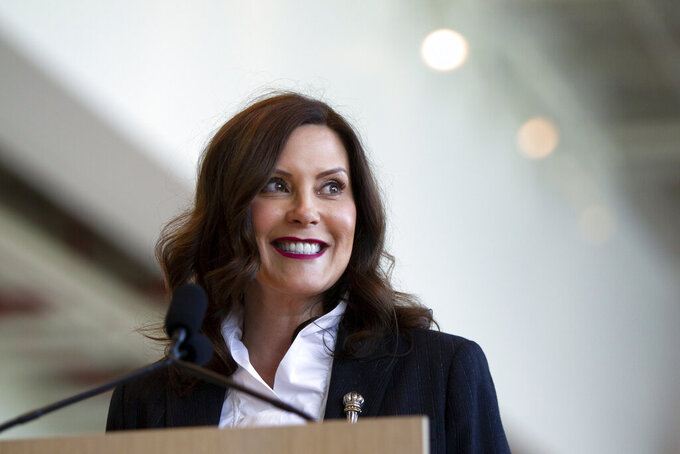 FILE - In this May 24, 2021 file photo, Gov. Gretchen Whitmer speaks at Steelcase in Grand Rapids, Mich. The Michigan Supreme Court on Friday, June 11 unanimously ordered the state elections board to certify a veto-proof initiative that would let Republican legislators wipe from the books a law Whitmer used to issue sweeping pandemic orders. (Cory Morse/The Grand Rapids Press via AP, File)

The governor this week has been touting the state’s “workshare” program as a return-to-work incentive as companies struggle to fill jobs amid the coronavirus pandemic. It provides partial jobless benefits when businesses bring back laid-off employees at reduced hours or they cut workers’ hours rather than let them go.

Whitmer, a Democrat, wants businesses that participate in the program to be able to hire employees who lost their job elsewhere — not just their former workers. They would be awarded a portion of their state unemployment benefit along with the federal $300 weekly pandemic benefit.

“Legislative action to expand the incentive means more opportunities for workers and more ways for business to attract and retain new and returning employees,” she said in a statement.

The Republican-led Legislature approved such an expansion in the fall, but it expired in March.

Under the workshare program, laid-off workers who return can see their hours and pay reduced by 15% to 45%. But they receive a corresponding 15% to 45% of their state jobless benefit plus the $300 federal benefit. Through Sept. 4, someone making $1,000 a week whose pay is cut by 30% would earn $1,108 a week when the business restarts.

Spokespeople for GOP legislative leaders had no immediate comment on the governor's proposal.