Whitmer's campaign will pay for Florida flight to see dad 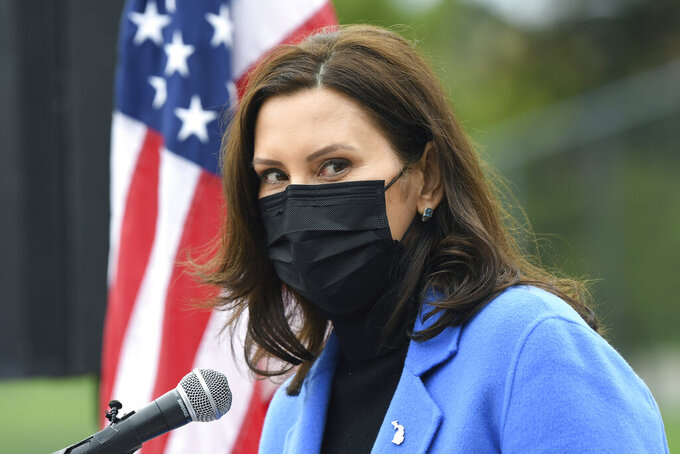 LANSING, Mich. (AP) — Michigan Gov. Gretchen Whitmer's reelection campaign — not a nonprofit fund — will pay for her flights to and from Florida, where she visited her ailing father in March.

The about-face Thursday came in a letter to a Republican lawmaker who had asked questions about the pandemic trip. A lawyer for the governor's campaign and the fund said he learned from Detroit-based PVS Chemicals, which supplied the private jet, that it could not accept the $27,521 payment except from a candidate committee because it is not authorized to operate charter flights. The Detroit Free Press had first reported last week that the Federal Aviation Administration was looking into the matter.

In a letter to House Oversight Committee Chairman Steve Johnson, Christopher Trebilcock said PVS and the fund, Michigan Transition 2019, learned of a “miscommunication” between themselves over the source of payment due to media reports.

He said Whitmer flew private, instead of commercial, for security reasons — citing death threats and noting an alleged plot to kidnap her over her COVID-19 restrictions. Her state security detail accompanied her. Their expenses will be covered by the campaign, reducing the burden on taxpayers, he said.

“But for her elected office, the governor would not have incurred the security expenses for travel to see her ailing father on short notice,” Trebilcock said.

He also disclosed that Whitmer's two daughters were on the return flight after helping manage their grandfather's health issues for several weeks while attending college and high school remotely. The governor will reimburse her committee for the cost of a first-class commercial airline ticket for herself and her daughters. Her office had previously said she would pay $855 for her flight.

The business jet is registered to Air Eagle, whose agent is John Nicholson, executive vice president of PVS, according to state records. An aide to Whitmer contacted PVS on or around March 8 to ask if it had a plane to fly her to Florida, according to the letter. She left March 12 and returned March 15.

The campaign also paid $22,670 for the governor's Jan. 19-21 trip to and from Washington, D.C., for President Joe Biden's inauguration, Trebilcock said. The private plate was operated by New Hudson-based Solomon Plumbing Co.

“We did this to set the record straight and provide answers to Rep. Johnson’s questions,” campaign spokesman Mark Fisk said.

The GOP has criticized Whitmer for visiting her father after restricting visits to nursing homes and hospitals to help curb the coronavirus, keeping her travel secret until it leaked more than a month later and providing few details. Her administration eased visitation rules for residential care facilities 10 days before her trip.

She has noted no travel restrictions were in place and that she went before COVID-19 positivity rates surged above single digits.

Weeks after her return, she expressed concern about travel to Florida as infections soared in Michigan.

Last week, a conservative group filed a complaint with the IRS alleging that Whitmer’s travel fell outside the purpose of the tax-exempt social welfare organization, which was initially formed for her inauguration events and is used in part to lessen the burdens of government.

“Gov. Whitmer is desperately reversing course as she stares down potential federal investigations, and her attorney’s letter only raises new questions over the legality of a campaign committee paying for the personal expenses of an individual,” said Eric Ventimiglia, executive director of Michigan Rising Action.