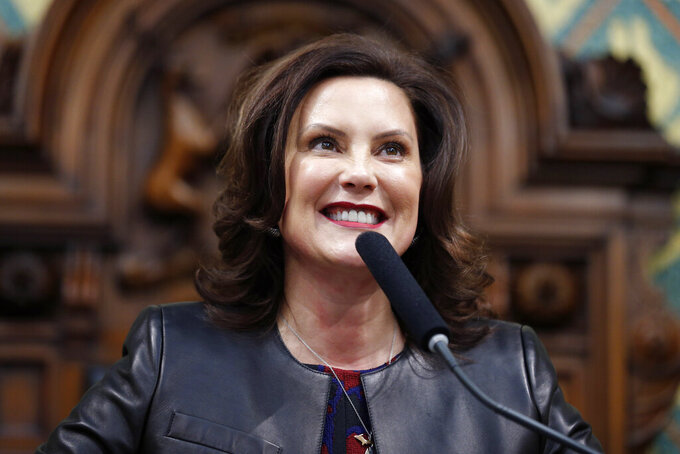 FILE - In this Jan. 29, 2020, file photo, Michigan Gov. Gretchen Whitmer delivers her State of the State address to a joint session of the House and Senate, at the state Capitol in Lansing, Mich. (AP Photo/Al Goldis, File)

LANSING, Mich. (AP) — Michigan Gov. Gretchen Whitmer's quick ascension to the national stage — and onto Joe Biden's list of potential running mates — has left Democrats excited about what her future may hold and thankful that she will continue to lead Michigan.

Two years ago, Whitmer was on her way to a resounding victory in the battleground state. A year ago, she was struggling to get legislative traction for her signature campaign promise of fixing the roads.

But in the past six months, Whitmer has delivered the Democratic response to President Donald Trump’s State of the Union address, confronted the ongoing coronavirus pandemic and been vetted as Joe Biden’s running mate. He announced Kamala Harris as his pick on Tuesday. Whitmer's profile rose yet more during a flurry of TV appearances in the spring in which she criticized the federal response to the COVID-19 outbreak, leading Trump to dismiss her as “the woman in Michigan."

“It's really been a meteoric rise in less than two years," said Jill Alper, a Michigan-based Democratic strategist.

Though Republicans have accused Whitmer of auditioning to be the running mate during a pandemic, Alper said she has “only wanted to be the governor of Michigan. That has been her focus. That's what she'll stay focused on. But her future is definitely bright because this process has shone the light on her.”

The 48-year-old Whitmer, a former legislative leader and interim county prosecutor, is up for reelection in 2022. Her job approval rating, once under water, has risen during the coronavirus crisis despite the restrictions she has ordered to curb the virus.

The extra attention she has received, along with her close relationship with Biden, will help if he defeats Trump and also open doors to new donors outside Michigan. If she wins in two years, she would be positioned if she decided to seek another office.

“Being governor has been more of a nationally profiled job in the age of COVID because there were hot spots and governors who stepped up and took on a president who wasn't doing the things they thought needed to be done,” Alper said.

Whitmer flew to Delaware last week to meet with Biden. She was one of 11 finalists he interviewed in the final nine days before he made his pick.

She agreed to intensive vetting despite having sent word to Biden’s team earlier that she no longer wanted to be considered. Whitmer said she had plenty on her plate and that Biden should choose a Black running mate following the police killing of George Floyd, according to a high-ranking Michigan Democrat familiar with the process. The official, who spoke to The Associated Press on the condition of anonymity to discuss private conversations, said Biden asked Whitmer to stay in the mix.

Now she can fully focus on major issues ahead — not just the pandemic and legislation related to the start of the school year, but also a projected $3 billion shortfall in the budget year that starts in October.

Her relationship with the Legislature has never been worse. Majority Republicans sued to challenge her use of emergency powers to issue new coronavirus orders, saying she acted beyond her authority. The sides later were able to patch a hole in the current budget thanks to federal help. Yet with an additional round of aid from Congress in doubt, the negotiating skills of Whitmer and GOP leaders will be put to the test.

Also this fall, Democrats are looking to win back control of the House for the first time in a decade, which would improve Whitmer's chances of enacting her legislative agenda. And around the corner are her 2022 bid for reelection and crucial battles for the Senate and House after redistricting.

Democrats laughed off the criticism, saying it was refreshing for Michigan voters to see their elected leaders in the national spotlight for positive reasons, especially following the Flint water crisis.

“It seems like a compliment, if anything, to me,” said Josh Pugh, who works as a consultant for liberal groups and organized labor. The public has viewed Whitmer favorably despite conservatives groups' protests, according to polling.

“There's certainly something to be said for a leader who is able to keep their head through all of that and come out on the other side looking stronger," Pugh said. "It should excite every Michigan Democrat headed into 2022 that we've got an incumbent governor in very strong standing, who's earned every bit of that standing.”