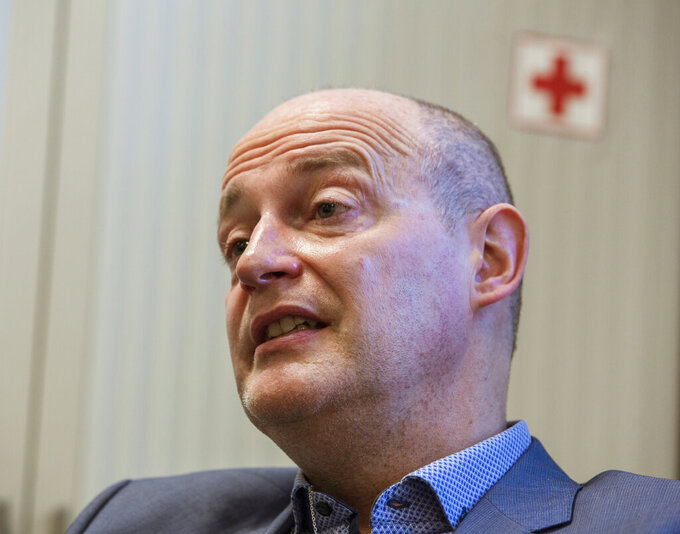 FILE - In this Dec. 18, 2020 file photo, Francesco Zambon, lead author of a withdrawn WHO report into Italy's coronavirus response speaks with The Associated Press in Rome. Zambon said he was pressured by a then-assistant director general, Dr. Ranieri Guerra, to falsify data about Italy’s preparedness going into the pandemic in a report he and other researchers were writing to help other countries prepare as COVID-19 swept across the globe last year. (AP Photo/Domenico Stinellis) 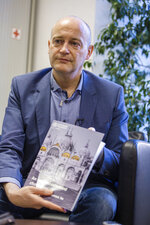 ROME (AP) — Whistleblower protection groups urged the World Health Organization on Wednesday to launch an independent review into the case of an Italian researcher who reported being pressured to falsify data in a now-spiked WHO report into Italy’s coronavirus response.

The groups, including Transparency International, Whistleblowing International Network and some 30 other public health and anti-corruption groups, sent an open letter to the president of the World Health Assembly. The assembly, WHO’s highest decision-making body, is made up of all WHO member states and is meeting this week.

In the letter, the signatories called for the U.N. agency to commit to reforming its whistleblowing protection policy. They said the Italian researcher, Dr. Francesco Zambon, had suffered retaliatory treatment for having reported the incident within WHO’s internal ethics system.

Zambon resigned in March, saying he had been isolated and marginalized after he complained internally, and then publicly, about the scandal.

Zambon has said he was pressured by a then-assistant director general, Dr. Ranieri Guerra, to falsify data about Italy’s preparedness going into the pandemic in a report he and other researchers were writing to help other countries prepare as COVID-19 swept across the globe last year.

Emails and drafts of the report show Guerra wanted the report to say that Italy had “updated and reconfirmed” its pandemic preparedness plan in 2016. Zambon says Italy’s plan dated from 2006 and refused to make the change.

The report was published May 13, 2020, but was taken down from the website a day later, after WHO’s Beijing office flagged politically sensitive problems with a timeline about the virus’ origins in China. Zambon says he corrected the timeline and had the report reprinted, but WHO never re-posted it or distributed it.

WHO has said the report contained factual inaccuracies and was published prematurely and without securing all approvals. It has said WHO didn’t pressure anyone, and that the decision to withdraw the report was taken by its regional European headquarters.

Asked Wednesday about the letter, WHO spokesperson Christian Lindmeier said in an email that the U.N. agency did not consider Zambon a whistleblower under its policy but that his complaint about Guerra had been received and was under review.

Lindmeier said WHO can't comment on individual cases but added that “professional conflicts between staff members are handled in line with WHO’s regulatory framework and Dr. Zambon has availed himself of the options open to staff members in that respect."

Guerra, for his part, has said he had no role in the decision to withdraw the report and that his proposed amendments were to correct inaccuracies. In a legal filing to Bergamo prosecutors who are investigating Italy’s COVID-19 toll, Guerra said the pandemic plan didn’t need to be updated during the time he was in charge of prevention at the Italian Health Ministry, during 2014-2017.

The open letter says the spiking of the Italy report deprived the world of vital public health information as the pandemic was gaining a foothold in Europe. Italy was the first country in the West to be hit hard by the coronavirus.

And the letter said the alleged retaliation against Zambon “highlights serious failures of WHO’s whistleblowing policy — an essential element of any institution’s good governance.”