Who's in charge: Career staffers move to acting Cabinet head 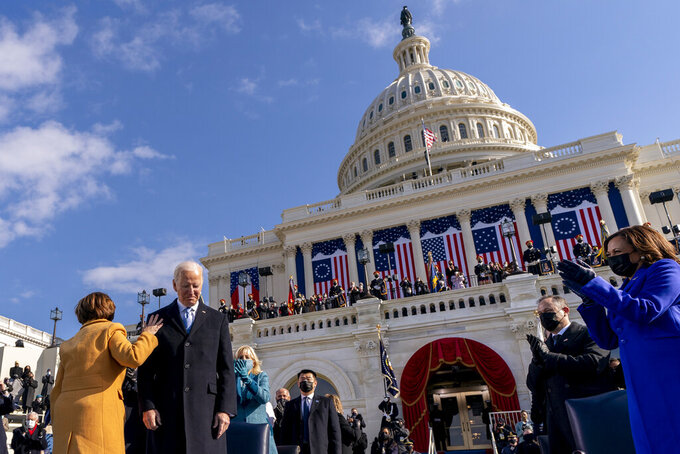 Like 8,000 flying trapeze artists passing in midair, the Biden and Trump administrations swapped out senior leadership of the federal government on the fly as Joe Biden was inaugurated as the nation's 46th president.

Biden announced the dozens of career civil servants who would be leading federal agencies, pending Senate approval of his permanent nominees. Acting heads of Cabinet agencies raised their right hands Wednesday afternoon for oaths of office. Emails went out briefing federal employees on just which career employee would be serving as their acting boss.

It’s a painstakingly executed exchange of Cabinet agency senior staffing with inherent risk of bad goof-ups in the best of years, former agency officials and scholars of the federal bureaucracy say. And this year, when Biden’s administration was starting work amid fears that President Donald Trump’s followers would launch more attacks like the Jan. 6 insurrection at the U.S. Capitol, had added challenges.

“Day One is always going to be the riskiest” when it comes to uncertainty about who's in charge, or the new people missing news of some critical event during an agency transition, said Paul C. Light, a professor of public service at New York University. One example, he said, would be scientists in the ranks learning of some vital development in the spread of the coronavirus pandemic or development of vaccines.

“As sure as we’re talking here, these things happen,” Light said. “It’s a very dense hierarchy and there are no alarm bells."

There was no immediate word of any trouble Wednesday in the first hours of the change in leadership. Biden supporters earlier had accused Trump security agencies of failing to share vital information in the weeks leading up to the handoff.

Trump’s false insistence that he, not Biden, won the presidential election raised the level of worries over Wednesday’s transition.

U.S. officials this month made a point of specifying in advance who would be the acting head of the Defense Department at 12:01 p.m. Wednesday, the minute after Biden became president.

Across Cabinet-level agencies, most political appointees of the old administration turned in resignations by Inauguration Day, following tradition.

Before leaving office, Trump had tweaked the orders of succession at some agencies, including the Environmental Protection Agency, in ways that changed which career staffer was in charge when all the political appointees go away.

Environmental advocates and other opponents of the Trump administration, and scholars of government, expressed suspicion of some of Trump’s succession changes in his last weeks, fearing he might plant loyalists as acting heads to make trouble for Biden.

But Barack Obama’s White House and others before him in their finals weeks also made adjustments to who’s left in charge in agencies, said Anne Joseph O’Connell, a Stanford Law School professor and expert in government process.

That's usually “not because of party preferences but to help with good governance,” O’Connell said. “To the extent you care about government, you care about transition.”

However, with Trump’s reluctance after Election Day to yield power, “you could see why many would question the need for changes to succession now,” she added.

In any case, federal law on vacancies gives incoming presidents wide choice in picking their own acting agency heads from among employees, regardless of succession plans. Biden by Wednesday afternoon announced his own selections of acting agency heads, from the State Department to the Social Security Administration to the National Endowment for the Arts.

“My expectation is that the incoming Biden administration will be relying very heavily on the vacancies act to staff their administration until their nominations are confirmed,” O’Connell said.

Researchers have crunched the federal government’s annual directory of executive-level Cabinet staffers — the associates to the chiefs of staff, the deputies to the deputies — each year since the Kennedy administration. There were 451 of them, then.

There were 3,265 of those senior Cabinet employees when Obama left town — and 4,886 at last count under Trump, Light said, in research that Brookings published in October.

The thicker bureaucracy adds to the risk of vital communications not making it up to new leaders, Light said.

The rule for any acting heads remaining from past administrations is simple, Light said: Do no harm.

The understanding over the years is “acting appointees are not going to do anything significant” without warning, he said. “We just cross our fingers and hope that people will behave.”