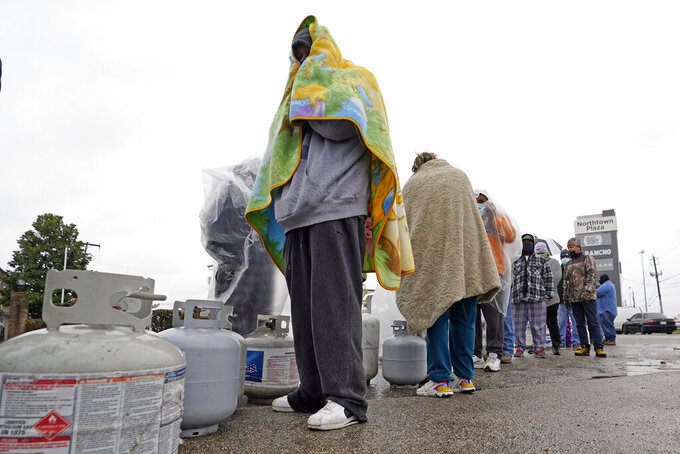 Carlos Mandez waits in line to fill his propane tanks Wednesday, Feb. 17, 2021, in Houston. Customers had to wait over an hour in the freezing rain to fill their tanks. Millions in Texas still had no power after a historic snowfall and single-digit temperatures created a surge of demand for electricity to warm up homes unaccustomed to such extreme lows, buckling the state's power grid and causing widespread blackouts. (AP Photo/David J. Phillip) 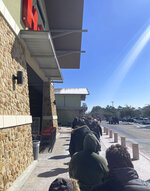 A series of winter storms and widespread power outages gripping Texas and other states not used to such extreme low temperatures are creating big challenges in the nation's food supply networks.

Grocery chains like Walmart and Publix have been forced to close some stores either because of lack of power or lack of workers. And at locations that remain open, customers complain of long lines outside and then empty shelves once brimming with water, bread and milk when they get inside. Texas grocery chain H-E-B, for example, closed some stores and is limiting customer purchases of items like brisket and propane tanks.

The power outages have caught plenty of people unprepared, like Jon Reilly, who says he always keeps a month's supply of canned food on hand for hurricanes. But on Wednesday, his daughter and wife waited 20 minutes in line outside of a grocery store in Corpus Christi, Texas, only to come out with bread and water. They found no milk, cheese or meat. He's also running low on propane, which he's using to power up the outdoor grill for cooking.

“We thought it was going to be cold,“ said Reilly. “We didn't expect to not have power for a week."

Rodney Giles, 35, of the Woodlands, Texas, went out to get steak to grill for his family on Tuesday. But he ended up waiting in line for two hours outside his local H-E-B. When he got inside, the only things available were tofu, oat milk and other things he didn’t want. But after living through several hurricanes and the pandemic, he hopes the store's stock will improve soon.

“Even during the pandemic here in March, the first day the shelves were empty, but the next day they were fully stocked,” Giles said.

Grocery retailers in Texas and in other parts of the South are used to hurricanes that can force them to shut down for a few days. But this week's massive winter storms are wider reaching, wreaking havoc on roads and the entire transportation infrastructure. The coronavirus pandemic is only exacerbating the issue as stores have to limit the number of customers.

Michael Zimmerman, a partner in the strategic operations practice of global management consulting firm Kearney, predicts it will take another two weeks before grocery shelves in the affected areas “look normal" again. He noted that grocery chains run a very efficient operation, keeping in stock what they need and relying on continuous flows of deliveries. But that can backfire in situations like snowstorms and power outages when it helps to have the extra inventory.

“Supermarkets just don’t have room, even if they could store garlic for three years," he said.

Meanwhile, food suppliers are having to scale back their operations or close down farms and plants because of the outages. Texas Agriculture Commissioner Sid Miller issued a red alert earlier this week, noting he’s getting calls from farmers and ranchers across the state reporting that the interruptions in electricity and natural gas are having a “devastating effect on their operations.”

In just one example, dairy operations are dumping $8 million worth of milk down the drains every day because the plants that process that milk don’t have power, Miller cited in his statement.

“We’re looking at a food supply chain problem like we’ve never seen before, even with COVID-19," he said.

Tyson Foods says it has temporarily scaled back or suspended production at some facilities to save energy costs.

Sanderson Farms Inc., one of the largest U.S. chicken companies, estimated Tuesday that as many as 200 of its roughly 1,900 Texas chicken houses don't have power. But the Mississippi-based company's chairman and CEO Joe F. Sanderson Jr. remained optimistic.

“This experience is similar to a hurricane,” said. Sanderson, Jr., in a statement . “We have experience managing through catastrophic weather events, and this will be no different."

The supply problems have extended to food banks, hampering their ability to feed those most in need. Celia Cole, the CEO of hunger-relief organization Feeding Texas, said most of the 21 food banks the organization runs across the state have been closed due to the weather, power issues or people being unable to come into work. But several have been providing food to warming stations in more urban areas of the state.

“I don’t think there’s a single community that hasn’t been touched,” she said. “The biggest challenge we’re facing in terms of being able to help people is the supply chain disruption.”

Amid the chaos, however, are a few bright spots, like for Bruna Villalon, 24, who lives with her husband and three dogs in Austin, Texas. She went to Walmart on Monday to stock up on essentials when the power went out.

“The store manager had to ask each individual shopper how much they thought groceries were, and if we didn’t have cash, we could just leave with the groceries,” said Villalon, who paid $20 in cash for about $35 worth of groceries.

D'Innocenzio and Anderson are based in New York. AP Business Writer Dee-Ann Durbin in Ann Arbor, Michigan contributed to this report.