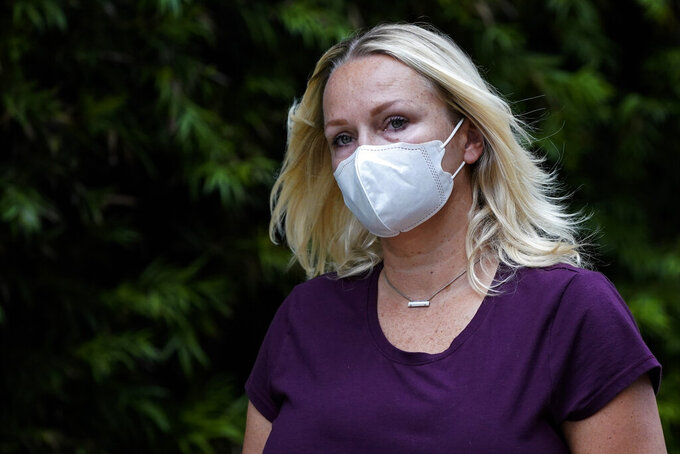 FILE - In this Monday, Aug. 24, 2020, file photo, Margaret Hunter, the wife of former California Republican Rep. Duncan Hunter, leaves a federal building in San Diego. Margaret Hunter has filed for divorce from former Rep. Duncan Hunter on Nov. 20, 2020, in San Diego Superior Court, according to online records. Both were convicted of corruption and prosecutors had said that the lawmaker had used campaign funds on extramarital affairs. (AP Photo/Gregory Bull, File)

SAN DIEGO (AP) — The wife of former Rep. Duncan Hunter has filed for divorce after both were convicted of corruption and prosecutors alleged the lawmaker had used campaign funds on extramarital affairs.

Margaret Hunter filed for divorce on Nov. 20 in San Diego Superior Court, according to online records.

Margaret Hunter stated in the filing that she was ending their marriage of 22 years because of “irreconcilable differences,” and requested joint legal custody of their 17- and 14-year-old daughters, according to the San Diego Union-Tribune. Their oldest son is an adult.

Last year, the couple each pleaded guilty to a single corruption count of misspending more than $150,000 in campaign funds on a variety of purchases, including trips to Italy, hefty bar tabs, and airplane tickets for the family's pet rabbit. Prosecutors in court documents suggested the congressman also spent the money on weekend getaways and outings with at least five women, three lobbyists, a staff member and a congressional aid.

Duncan Hunter resigned from his seat in January 2019.

Margaret Hunter had faced a maximum possible sentence of five years in jail. But prosecutors said her cooperation and agreement to testify against him was critical in obtaining the congressman’s conviction without going to trial.

She was sentenced in August to eight months of home confinement.

Margaret Hunter had served as campaign manager for her husband, who represented a district east of San Diego that includes parts of Riverside County. He suggested at one point that she was to blame for any financial problems. Prosecutors said the couple were both in on the scheme.

Duncan Hunter was sentenced to an 11-month prison term, but the start was delayed until January because of the coronavirus pandemic.

In November, former Rep. Darrell Issa, who represented a coastal district in neighboring Orange County for 18 years, was elected to his vacant seat.