WikiLeaks' Assange won't get US extradition ruling this year 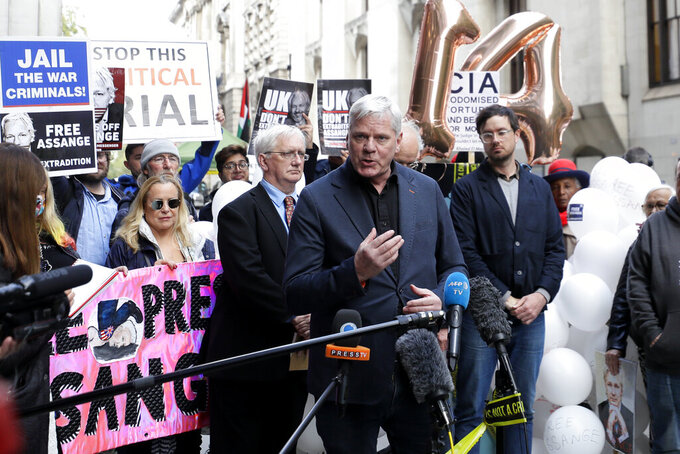 Kristinn Hrafnsson editor in chief of Wikileaks gives a statement outside the Old Bailey in London, Thursday, Oct. 1, 2020, as the Julian Assange extradition hearing to the US ended, with a result expected later in the year. (AP Photo/Kirsty Wigglesworth)

LONDON (AP) — WikiLeaks founder Julian Assange will likely spend the rest of 2020 inside a British prison cell before finding out whether he can be sent to the United States to face espionage charges, the judge in his extradition hearing said Thursday.

After hearing nearly four weeks of evidence at London's Old Bailey courthouse, District Judge Vanessa Baraitser said she would deliver her decision on whether to grant a U.S. extradition request for Assange at 10 a.m. on Jan. 4. Assange is fighting extradition.

The judge's ruling won’t necessarily end the proceedings. Whichever side loses is expected to appeal. There’s also the possibility of a change in U.S. policy should Joe Biden defeat President Donald Trump in the Nov. 3 U.S. presidential election.

“Unless any further application for bail is made, and between now and the 4th of January, you will remain in custody for the same reasons as have been given to you before,” Baraitser told Assange, who was sitting behind a security screen at the back of the hearing courtroom.

The judge previously denied Assange bail over fears he is a flight risk. Assange jumped bail in 2012 when he sought asylum at the Ecuadorian Embassy in London, where he stayed for seven years before being evicted and arrested. He has been in custody at Belmarsh prison in London since April 2019 and is expected to appear in court via video link every 28 days between now and the Jan. 4 ruling.

U.S. prosecutors have indicted the 49-year-old Assange on 17 espionage charges and one charge of computer misuse over WikiLeaks’ publication of secret American military documents a decade ago largely relating to the wars in Afghanistan and Iraq.

Following the adjournment on Thursday, Stella Moris, Assange's fiancée and the mother of his two young children, said, “Julian and I would like to thank everyone for the kindness that has been shown over the past few weeks.”

Now that lawyers have finished presenting evidence, Assange's defense team has asked for another four weeks to submit its closing argument. That will be followed two weeks later by the closing argument of the lawyers prosecuting on behalf of the U.S. government.

The judge has an abundance of evidence to trawl through in a hearing that was delayed by the onset of the coronavirus pandemic. Except for an early virus exposure scare and occasional outbursts from the usually face-masked Assange, the hearing proceeded smoothly.

The charges against Assange carry a maximum sentence of 175 years in prison. Lawyers acting on behalf of the U.S. government say Assange committed serious crimes that put people’s lives in danger, allegations his fiancée disputed.

Assange’s defense team argued he is entitled to First Amendment protections for the publication of leaked documents that exposed U.S. military wrongdoing and that the extradition request was politically motivated.

The London court heard from an array of witnesses, who pronounced on issues of huge importance and substance, such as the freedom of the press and government-sanctioned torture.

“Julian Assange’s actions, which have been characterized as criminal, are actions that expose power to sunlight," renowned U.S. linguist and scholar Noam Chomsky said.

Other witnesses relayed more shadowy — and sometimes comic — matters of intrigue during his time at WikiLeaks and at the Ecuadorian Embassy,

According to one witness, Assange “binge-watched” the suicide of the former Bosnian Croat general, Slobodan Praljak, at a U.N. court three years ago.

Defense lawyers said Assange was suffering from wide-ranging mental health issues, including suicidal tendencies, that could be exacerbated if he is placed in inhospitable prison conditions in the U.S. They said Assange’s mental health deteriorated while he took asylum inside the embassy and that he was diagnosed with an autism spectrum disorder.

His legal team argued that Assange would very likely face solitary confinement in the U.S. immediately that would put him at a heightened risk of suicide. They also said that if convicted, Assange would most likely be sent to the notorious ADX Supermax prison in Colorado, a facility labeled by a former warden as a “fate worse than death” and inhabited by the likes of Unabomber Ted Kaczynski and Mexican drug lord Joaquin “El Chapo” Guzman.

Lawyers acting on behalf of the U.S. government argued that Assange’s mental state was not as poor as described and said he wouldn’t be subject to improper conditions before or after any trial.

Assange has attracted the support of high-profile figures, including actress Pamela Anderson and rapper M.I.A. The dissident Chinese contemporary artist Ai Weiwei also staged a silent protest outside the court.

Daniel Ellsberg, perhaps the most famous whistleblower in living memory, argued that they had “very comparable political opinions.”

The 89-year-old, widely credited for helping to bring about an end to the Vietnam War through his leaking of the so-called Pentagon Papers in 1971, said the American public “needed urgently to know what was being done routinely in their name, and there was no other way for them to learn it than by unauthorized disclosure.”

There are clear echoes between Assange and Ellsberg, who leaked over 7,000 pages of classified documents to the press, including The New York Times and The Washington Post. He was subsequently put on trial on 12 charges in connection with violations of the Espionage Act, which were punishable by up to 115 years in prison. The charges were dismissed in 1973 because of government misconduct against him.

Assange will be hoping that developments within the U.S. government over the coming weeks will lead to a similar outcome for him — before any judgment from the London court.