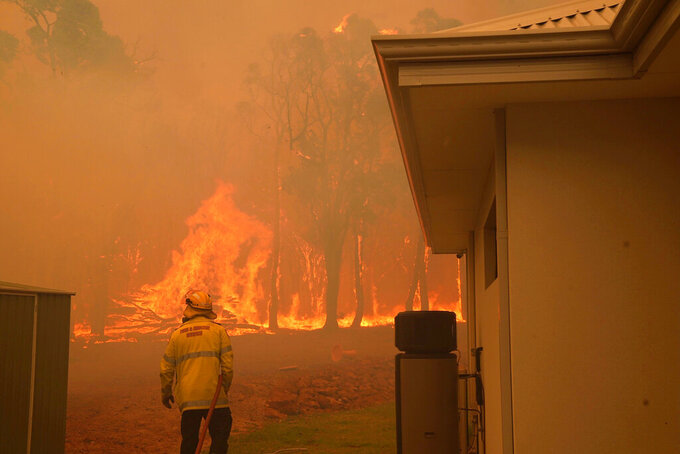 In this photo provided by Department of Fire and Emergency Services, a firefighter works at a fire near Wooroloo, northeast of Perth, Australia, Tuesday, Feb. 2, 2021. An out-of-control wildfire burning northeast of the Australian west coast city of Perth has destroyed dozens of homes and was threatening more. (Evan Collis/DFES via AP)

PERTH, Australia (AP) — More than 70 homes have been lost in a wildfire outside Australia's western city of Perth that is expected to continue burning for days.

The fire had razed more than 9,000 hectares (22,200 acres) of farm and woodland in hills east of Perth by early Wednesday, authorities said.

Western Australia state’s Fire and Emergency Services Commissioner Darren Klemm said the number of houses destroyed had jumped to 71 overnight, and conditions would remain difficult for firefighters with no rain forecast until Sunday. The jump was from 59 houses late Tuesday.

“We’re into day three of this fire today and it’s going to continue to be a challenging fire for us for at least the next three or four or five days,” Klemm said.

Mayor Kevin Bailey of Swan, one of the rural communities threatened by the blaze, said many residents remained on high alert.

“We’ve got strong easterly breezes predicted. That’s of great concern for us, because there’s still a lot of active fire, even in those areas that have burned over the last couple of days. So it’s a great risk,” Bailey told Australian Broadcasting Corp.

Perth and its surrounds had been in lockdown since Sunday as a pandemic precaution, but those threatened by the fire were exempted from the pandemic stay-at-home order so they could evacuate.

“A lot of people were at home — they weren’t at school or work — so they were very fortunate to able to react quickly,” Bailey said.

Many people who had fled to evacuation centers were unsure whether their homes had survived, he said.

“We can’t get accurate information yet because the fire ground is unsafe for crews to assess what’s happened there,” Bailey said.