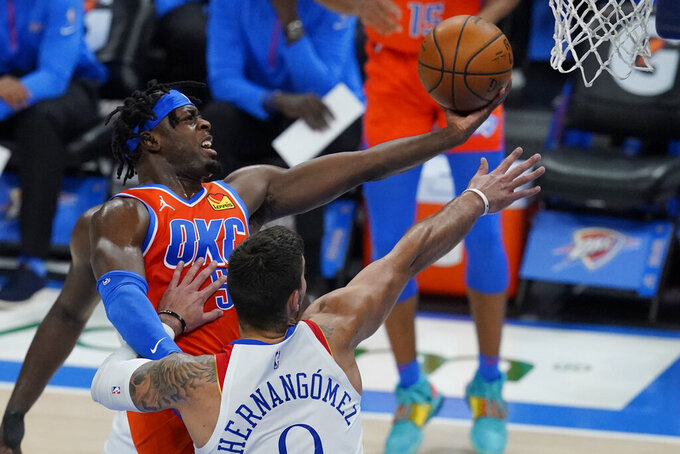 Williamson also had eight rebounds and six assists in the 82nd game of a career that has been interrupted by a torn right lateral meniscus and the COVID-19 pandemic.

In his career so far, which has amounted to one full normal season's worth of games, he has averaged 25.5 points and 6.9 rebounds while shooting 61% from the field. He was on the All-Rookie team his first year and made the All-Star team in his second season.

He hasn’t made it to the playoffs yet, though. The Pelicans are in the hunt for the No. 10 spot in the Western Conference and a berth in the play-in tournament. They had lost six of eight and were coming off a 114-112 loss to Denver on Wednesday.

Williamson is focused on the postseason.

Lu Dort scored 17 points, Theo Maledon added 16 and Moses Brown grabbed 18 rebounds for the Thunder. Oklahoma City was coming off a win over the Boston Celtics on Tuesday that snapped a Thunder record-tying 14-game losing streak.

The Pelicans closed the first half on a 19-3 run to take a 60-43 lead. Williamson scored 16 points and Ingram added 15 in the first half to help New Orleans shoot 51%.

“I think we just had finally woke up, to be honest,” Williamson said. “Second half of a back-to-back — I think everybody was just kind of mentally tired, but in the first half, we all just woke up and we made a run.”

The Pelicans took a 79-68 lead into the fourth quarter, then quickly took control for good. Jaxson Hayes' fast-break dunk put the Pelicans up 90-73, and the Thunder got no closer than 12 points the rest of the way.

“I thought there were a couple stretches of the game where we just couldn’t seem to string together enough plays offensively or defensively,” Thunder coach Mark Daigneault said.

Pelicans: Former Thunder center Steven Adams sat out with a sprained right foot. Willy Hernangomez took Adams' place in the starting lineup and had 13 points and 10 rebounds ... Won despite making just 5 of 29 3-pointers.

Thunder: Guard Charlie Brown Jr. had two points and two rebounds in nine minutes in his second game with the Thunder and his first game in Oklahoma City since being signed to a 10-day contract. ... Darius Bazley scored 15 points. ... Isaiah Roby had 13 points and nine rebounds in 16 minutes.

Forward Gabriel Deck played for the first time since the Thunder signed him, and his former Argentina teammate, Manu Ginobili, was watching.

He had a flashy behind-the-back pass for an assist to Roby that got the Thunder bench players on their feet and Ginobili responding on social media. In a Tweet translated from Spanish, he said “Now a nice fajita! I am so happy!” above a clip of the play.

Pelicans coach Stan Van Gundy was asked how Williamson's first 82 games compares to the all-time greats. He referenced a response the late football coach Bum Phillips gave years ago when asked about running back Earl Campbell.

“Is he the best young guy ever? I don't know. But in that class, it's not going to take you long to take attendance in there.”