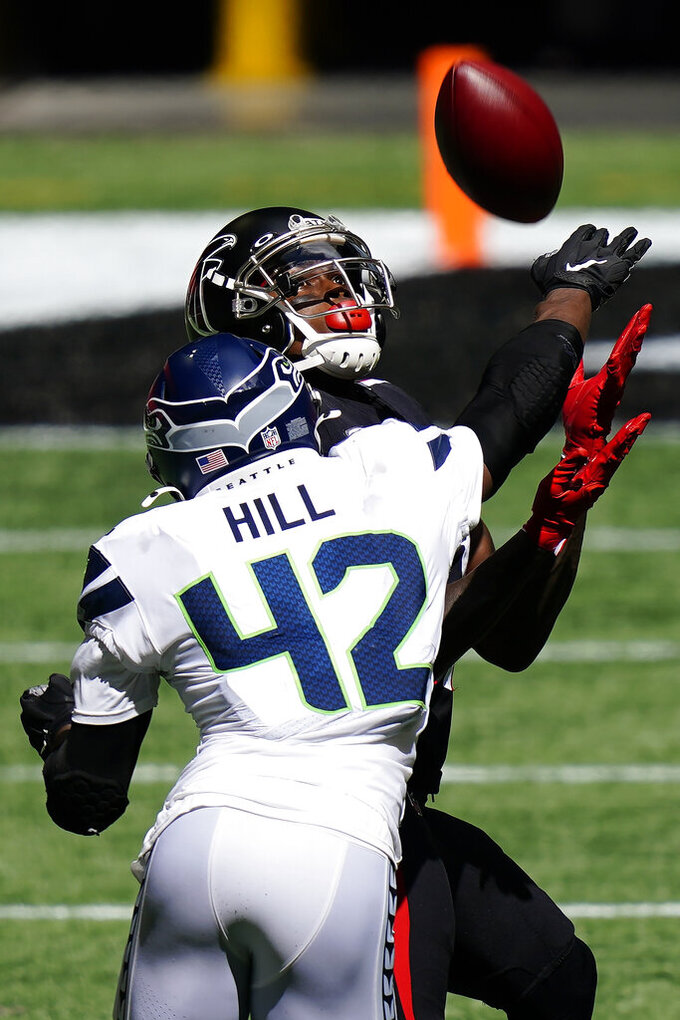 The only thing he burned was the Atlanta Falcons.

Showing what he can do when given a chance to open up the offense, Wilson threw four touchdown passes to lead the Seahawks to a 38-25 victory over the Falcons in the season opener Sunday.

Wilson dished out throws to nine receivers, finishing 31 of 35 for 322 yards. He also carried the ball three times for a team-high 29 yards rushing.

That sort of talk will surely be pleasing to Seahawks fans, who have pleaded with the team to “Let Russ Cook” — essentially a call to be more aggressive offensively from the start rather than relying on Wilson to keep leading dramatic comebacks.

How did that work out?

The Seahawks threw on 21 of their first 35 plays. More tellingly, Wilson dropped back to pass on seven of 12 first-down plays in the opening half, and ran it himself two other times. There were only three handoffs in those situations.

“Russell was in total command of the game," Seattle coach Pete Carroll said.

Wilson threw a pair of TD passes in the first quarter as Seattle built a 14-12 halftime lead. He added two more in the third quarter to put the Falcons away in a game played with no fans at Mercedes-Benz Stadium because of the coronavirus pandemic.

The biggest play of all came after the Falcons made what looked to be a crucial stop, leaving the Seahawks with fourth-and-5 at the Atlanta 38. The offense stayed on the field, but instead of going for the first down with a short throw, Wilson lofted one to DK Metcalf, who was streaking toward the end zone.

“They made a good stop on third down and were all celebrating,” Wilson said. “I looked at the sideline and said, ‘OK, let’s go after ’em.’ I wanted to be aggressive.”

On the ensuing possession, Atlanta attempted a fake punt on fourth-and-2 from its own 33. Blocking back Sharrod Neasman took a direct snap and had enough for the first down on a run up the middle, only to fumble the ball away. It was recovered by Seattle's Freddie Swain at the 36.

Five plays later, Wilson zipped his fourth TD pass of the game, a 7-yarder to new tight end Greg Olsen. The 35-year-old was let go after spending the last nine years at Carolina, where he faced the Falcons twice a season.

Wilson hooked up with running back Chris Carson on his first two scoring passes.

A 3-yard TD toss was set up by a 41-yard pass interference penalty against Ricardo Allen that erased a third-and-23 hole. After the Falcons were stopped on a fourth-and-3 play from their own 40, Wilson went to Carson again on a screen pass for a 19-yard score.

The Falcons outgained the Seahawks 506 yards to 383, with Julio Jones, Calvin Ridley and Russell Gage all collecting more than 100 receiving yards. But Atlanta came up short all four times it tried to convert on fourth down.

It was not a promising start to a make-or-break year for Falcons coach Dan Quinn, who kept his job despite back-to-back losing seasons. He likely must lead Atlanta to the playoffs to return in 2021.

The only bright spot for Atlanta was Matt Ryan going past John Elway for ninth on the NFL career passing yardage list. Matty Ice was 37 of 54 for 450 yards and a touchdown, the second-highest yardage total of his career.

Even that wasn't enough against Wilson.

“Just being himself,” Falcons defensive tackle Grady Jarrett said. "He’s a premier player in this league for a reason.”

Both teams protested racial injustice with a dramatic gesture on the first play of the game.

As the opening kickoff by Seattle’s Jason Myers sailed through the end zone, all 22 players remained in place and took a knee. After a few seconds, they stood back up, trotted off the field and the game carried on with the Falcons taking the ball at their own 25.

“It was good to have both organizations come together and do something together,” Jarrett said. “I think it will help spark conversations for change.”

Civil rights leader John Lewis, a longtime congressman from Atlanta who died in July, also was honored as every player wore white armbands with the initials “JL” and the team logos.

In addition, the Falcons made Lewis an honorary captain. A black jersey with his name was draped over an empty spot on the Atlanta bench.

Seahawks: DE Rasheem Green went out in the first half with a shoulder injury.

Falcons: Gage took a shot to the head on a helmet-to-helmet hit by new Seattle S Jamal Adams in the second quarter. After being evaluated for a possible concussion, Gage was cleared to return in the second half. Adams was not penalized on the play but could face discipline from the league when the play is reviewed.

Seahawks: Host Cam Newton and the New England Patriots in their home opener next Sunday.

Falcons: Travel to Dallas to take on the Cowboys next Sunday.