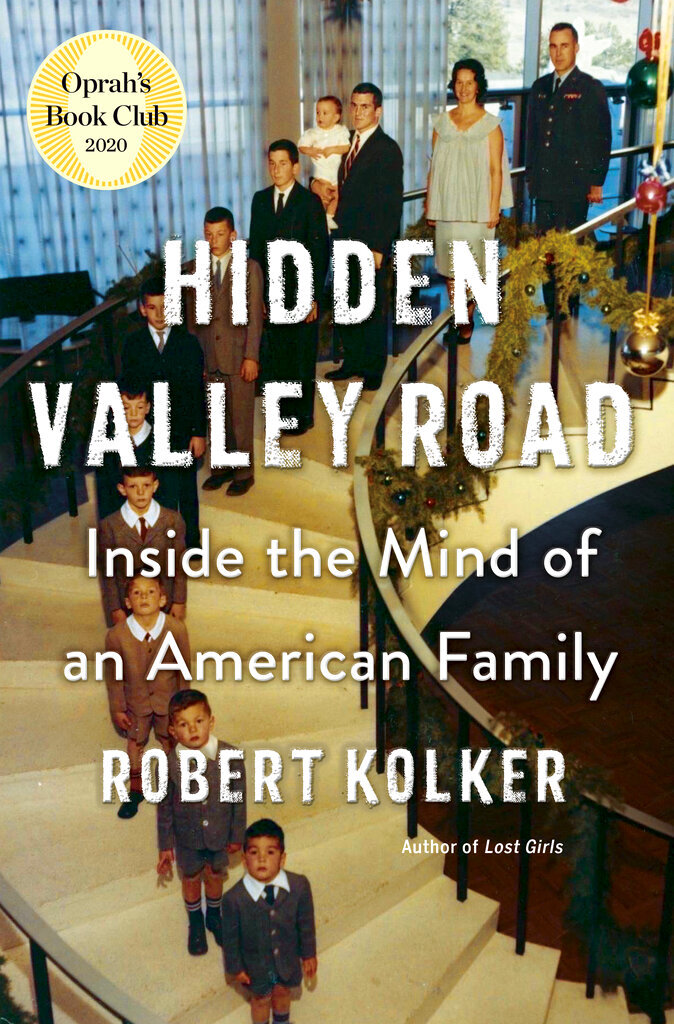 This cover image released by Doubeday shows Robert Kolker's “Hidden Valley Road." The book, an in-depth and highly praised account of a 1950s family in which six children were diagnosed with schizophrenia, was selected by Oprah Winfrey for her book club. Winfrey says that she will continue picking books during the coronavirus outbreak, and will seek new ways to engage readers. (Doubleday via AP)

NEW YORK (AP) — Oprah Winfrey's new book club pick is Robert Kolker's “Hidden Valley Road,” an in-depth account of a 1950s family in which six of 12 children were diagnosed with schizophrenia. Winfrey says she will continue picking books during the coronavirus outbreak, and will seek new ways to engage readers.

In announcing her choice Tuesday, Winfrey called “Hidden Valley Road” a “a riveting true story of an American family that reads like a medical detective journey. It reveals the shame, denial, shock, confusion and misunderstanding of mental illness at a time when no one was really sure what schizophrenia was or how to treat it.”

“Hidden Valley Road,” tells the story of the Galvins, an attractive, high-achieving Colorado family that was devastated by the illness. Kolker learned about them four years ago through a mutual friend and received extensive cooperation, speaking with nine of the siblings and their mother, and also drawing upon family letters, diaries and medical records.

In a review that ran last weekend in The New York Times, Sam Dolnick praised Kolker as a gifted storyteller and “a restrained and unshowy writer who is able to effectively set a mood.” Kolker has written for New York magazine and Bloomberg and is the author of “Lost Girls,” which has been adapted into a Netflix film starring Amy Ryan.

Kolker's new book, released this week, is Winfrey's fourth selection since starting a partnership with Apple last fall. She usually tapes a live appearance with the author that runs on Apple TV Plus. Because of the coronavirus, she will interview Kolker and Galvin family members remotely for a program expected to air in May.

Winfrey spoke to The Associated Press recently from her home in Santa Barbara, California, where she has been sheltering in place since early March, She said she had chosen “Hidden Valley Road” before the virus became widespread, but says it's even timelier now, because of its story of a baffling and horrifying illness. She was also personally drawn to the narrative, explaining that a young student from the school she runs in South Africa has three siblings diagnosed with schizophrenia.

“I've watched the ways that mental illness can rampage a family, and how they deal with the stigma of it and overcoming the shame of it,” Winfrey said.

Winfrey has helped generate millions of sales over the years, but her announcement comes at a time of deep declines in book sales and widespread industry layoffs, from bookstores to the publisher Macmillan, where Winfrey has an imprint. She began her club in 1996, and has never had a year of such unexpected and troubling challenges.

Her previous selection, Jeanine Cummins' “American Dirt,” had received widespread early praise and seemed set to be a critical and commercial hit. But a month before its January release date, some Mexican-American writers faulted the novel about a Mexican mother and son fleeing north as uninformed and exploitative. What Winfrey had thought would be a show about immigration ended up being a forum about the lack of Latino representation in publishing, and in Winfrey's club. (Winfrey reiterated that she plans to choose books by Latinos in coming months).

Not long after the Cummins show aired, in early March, the coronavirus spread around the country and Winfrey briefly wondered whether she should delay further choices. She decided instead that books, and conversations about books, were needed more than ever. In addition to her programs on Apple, Winfrey hopes to organize what she is calling literary pajama parties on Instagram.

“You have virtual dance parties," says Winfrey, who took part in an all-star online gathering hosted by DJ D-Nice. “So I was thinking of doing the same thing for books, trying to see how many people you get for a pajama party where you talk about a book.”