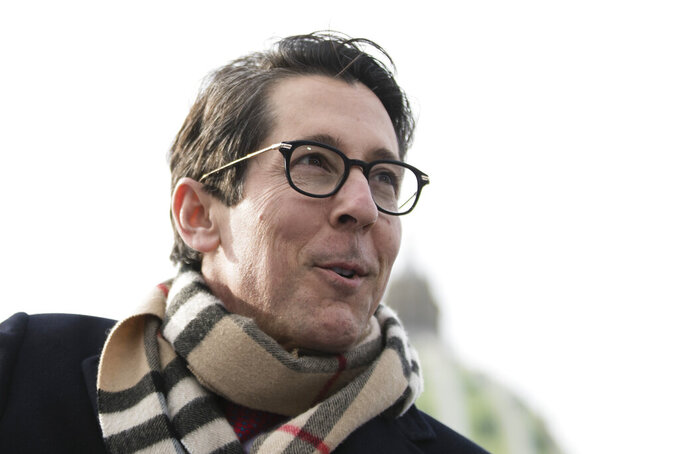 HARRISBURG, Pa. (AP) — Gov. Tom Wolf is raising money to help fellow Democrats in their quest to retake Pennsylvania's state House or Senate majorities, but there are other races that may have a bigger impact on his fortunes in his last two years in office.

The three statewide contests for attorney general, auditor general and treasurer elect people to four-year terms who can change how a governor manages the state's finances, pursues agendas outside of the Legislature and claims the mantle of a capable operator of government.

“They can have an influence,” former Gov. Tom Corbett said in an interview.

A political spokesperson for Wolf said the Democrat gave $10,000 in campaign donations to each of his fellow Democrats running for a so-called row office this year, a tiny sum compared with his giving to Democrats seeking seats in the Republican-controlled Legislature.

A Democratic takeover of even one chamber of the Legislature is a long-shot. Republicans, rather, may have a better shot at picking off a row office.

For Republicans, it’s an avenue they haven’t had in a long time. The last time Pennsylvania elected a Republican as attorney general, it was 2008; as treasurer, 2000; and as auditor general, 1992.

The row officers have built-in watchdog duties that can gum up a governor’s agenda.

For instance, a treasurer or auditor general must approve a general obligation bond issue, while both must approve a tax-anticipation note. Treasurers can block payments they see as illegal. Attorneys general must ensure all executive branch contracts are legal and can carry a governor's policy agenda in the courts in clashes with lawmakers or the White House.

They also can use their statewide platform to amplify an opposition message.

“You will have a bully pulpit on certain issues that may not fall within the purview of your job description,” said Rob Gleason, the former chairman of the state Republican Party.

In the view of Republicans, Wolf has benefitted from having Democrats in all three jobs since he took office in 2015, helping his agenda in budget battles or policy battles during the coronavirus with lawmakers. Wolf's relationships with the row officers have been smooth sailing compared with his conflicts with the Republican-controlled Legislature.

“It would be nice to have someone who’s going to be a watchdog, and those three positions put themselves out as watchdogs,” said state Rep. Greg Rothman, R-Cumberland.

Of course, row officers don't have to be of the opposite party to get under a governor's skin, especially when they want to run for higher office.

Former Gov. Ed Rendell, a Democrat, recalled feeling burned by how some audits were rolled out by then-Auditor General Jack Wagner, a Democrat who went on to run for governor in 2010, before losing in a crowded primary. But he got along with Corbett, the Republican state attorney general who succeeded Rendell as governor.

As governor, Corbett had high-profile scrapes with then-Attorney General Kathleen Kane, a Democrat who in 2013 rejected one of Corbett’s ballyhooed efforts at privatization, a contract to hire the operator of British national lottery to manage the Pennsylvania Lottery.

Meanwhile, Auditor General Eugene DePasquale promised an audit of the contract terms, and then-Treasurer Rob McCord warned that he might not pay the operator unless he was satisfied that the company’s plans to expand the scope of lottery gambling were allowed by law.

Later that year, Kane refused to defend Pennsylvania’s 1996 law banning same-sex marriage against a newly filed federal lawsuit, saying the law was unconstitutional. That forced Corbett’s office to mount a defense of a law that was losing political and legal favor just as he was gearing up to run for reelection.

Then, amid Corbett’s reelection run, DePasquale and McCord issued a warning about the state’s deteriorating finances, drawing accusations from Republicans that they were engaged in political theater.

Corbett sees Kane's treatment of him as the hallmarks of someone aiming for higher office — “She was looking for a future,” he said — but recalls no hard feelings toward DePasquale and McCord.

DePasquale is the only currently serving row officer who dealt with both Corbett and Wolf as governors, and insists he treated both men the same, regardless of party. He never, he said, blunted an audit to benefit Wolf.

“I take enormous pride in being hard on both Tom Corbett and Tom Wolf,” said DePasquale, who is now running for Congress against four-term U.S. Rep. Scott Perry in the Harrisburg-area 10th District.

If DePasquale never got under Corbett's skin, then he definitely got under the skin of Wolf administration officials, perhaps most recently when, in December, Wolf's secretary of state, Kathy Boockvar, accused him of issuing a misleading estimate of possibly inaccurate voter records.

That didn't stop Wolf from holding a fundraiser for DePasquale's congressional run, drawing complaints from Republicans.

Of course, the Republican-controlled Legislature had pushed through a 9% cut in DePasquale's official budget last year — after they knew he would challenge Perry.

“The thing I find fascinating about the criticism," DePasquale said, "is a lot of people who are criticizing me now were extolling my virtues before I ran for Congress.”