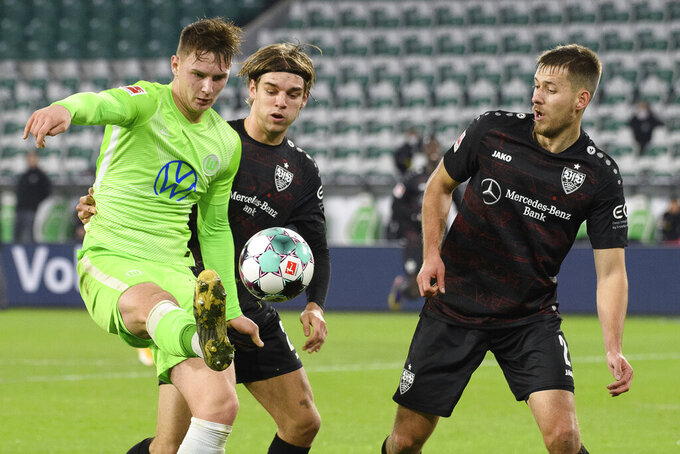 WOLFSBURG, Germany (AP) — Wolfsburg revealed a coronavirus outbreak at the club shortly before playing Stuttgart in the Bundesliga on Sunday, but its depleted team still ground out a 1-0 win.

Wolfsburg said two hours before kickoff that midfielder Maximilian Arnold and left-back Jerome Roussillon were in isolation at home on Saturday after testing positive.

Three other players were asked to quarantine by local authorities because they had close contact with the infected players. Right-back William was earlier sent into isolation on Tuesday after testing positive.

Wolfsburg moved past Borussia Dortmund to fourth place in the league with the win over Stuttgart. Josip Brekalo scored the only goal of the game in the 49th minute with a pinball-like free kick which took two deflections off Stuttgart players on its way into the net. Stuttgart is seventh after its first away defeat since it was promoted back to the Bundesliga for this season.

Poor defending let Hertha Berlin down in a 4-1 loss at Freiburg which leaves the big-spending Berlin team 14th in the 18-team league, and with one win in its last six games.

Freiburg opened the scoring with a diving header from the unmarked Vincenzo Grifo, before Hertha leveled with a tap-in from Dodi Lukebakio off a a deflected cross and missed a string of chances to score a second.

Hertha has been one of the Bundesliga's biggest spenders on transfers in recent seasons, with the aim of becoming a continental power, but has spent the last year and a half closer to the relegation zone than the European places. Freiburg is 10th after three consecutive wins.

It was the last day of games before a shortened winter break. Most Bundesliga clubs have a round of cup games Tuesday and Wednesday before the league resumes Jan. 2.