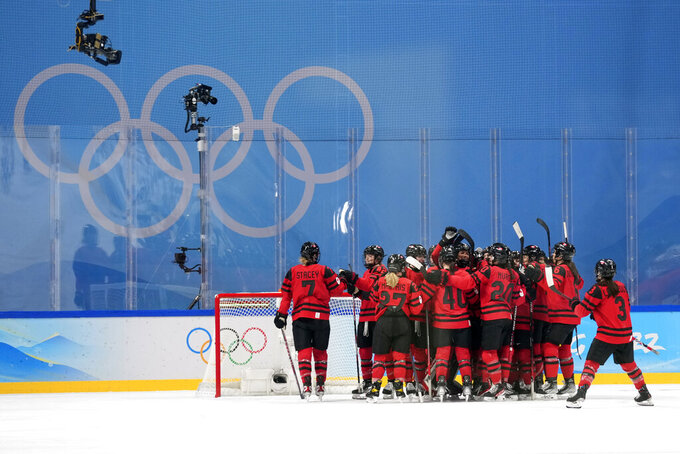 Canada players celebrate after an 11-1 win over Finland in a preliminary round women's hockey game at the 2022 Winter Olympics, Saturday, Feb. 5, 2022, in Beijing. (AP Photo/Petr David Josek)

BEIJING (AP) — Immediately after one of Finland's most lopsided losses in international women’s hockey history, general manager Tuula Puputti marveled with envy at the depth of talent Canada has assembled.

She began by referencing Canada’s top line centered by captain Marie-Philip Poulin, who has drawn comparisons to Sidney Crosby for scoring two gold-medal clinching goals. Then there’s a second line anchored by Sarah Fillier, the 21-year-old Princeton captain, who has already scored four times in her Olympic debut.

Puputti, however, didn’t stop there.

“Who wouldn’t want to have their third and fourth lines on their teams as well?” the former goalie said, incredulously. “It’s plenty to choose.”

Whatever faint hope there was of the rest of the world closing the gap on the Canadian and U.S. women’s hockey teams is quickly being dashed three days into the Beijing Games.

Canada outclassed its first two Group A opponents with a pair of 11-1 victories, beginning with Switzerland on Thursday and the Finns on Saturday. And Finland, which won bronze at the 2018 Winter Games and the world championships in August, hardly fared much better against the United States in a 5-2 loss on Thursday night.

The defending Olympic champion Americans improved to 2-0 by overcoming a slow start in a 5-0 win over the Russian team later in the day.

In Group B play, Haruka Toko had a goal and two assists, and Japan improved to 2-0 with a 6-2 victory over Denmark (0-2). The Czech Republic is off to a 2-0 start in its Olympic women's hockey debut after Tereza Vanisova scored twice in a 3-1 win over Sweden (0-2).

For Puputti, very little has changed her mind in the two months since she called Canada the tournament favorite.

“Today, it wasn’t our best game, and they came out very strong,” she said.

After Minnamari Tuominen provided Finland brief life by scoring from the left point to cut the deficit to 2-1 with 1:33 remaining, Canada responded with a five-goal second period.

Barring a drastic turn of events, the likelihood of the U.S. facing Canada in the gold-medal game for the sixth time in seven Olympic tournaments appears inevitable. The only exception was the 2006 Torino Games, when Sweden beat the U.S. in the semifinals before losing to Canada.

Canada’s up-tempo transition attack and heavy emphasis on the forecheck was readily apparent against the Finns. Fillier opened the scoring 61 seconds in by snapping in a shot from the right circle, and Sarah Nurse scored 11 minutes later off Sanni Rantala's giveaway.

The rout was on when Brianne Jenner and Laura Stacey scored 2:08 apart to put Canada up 7-1 with 3:25 left in the second period, when each of their pass attempts deflected in off Finland defenders.

“Not every game is going to look like that,” said Jenner, who scored three goals and added an assist. “But we’re confident with this group, no matter what the score is.”

Canada didn’t skip a beat despite missing second-line winger Melodie Daoust, who is listed as day-to-day after sustaining an upper-body injury against the Swiss. Jamie Lee Rattray filled Daoust’s spot and finished with a goal and two assists.

“It speaks to how versatile everyone’s game is,” Fillier said. “It’s the best 23 players in Canada. So, wherever you put anyone it’s going to click.”

The 11 goals scored were the most by the Canadian women against Finland in Olympic or world championship play. The 10-goal margin of defeat represented the Finns’ second worst behind an 11-0 loss to the U.S. at the 2012 world championships.

And to think, many outside of North America viewed the 2019 world championships as a potential turning point. That’s when the tournament host Finns stunned Canada with a 4-2 win in the semifinals and got within a disallowed overtime goal of beating the United States in an eventual 2-1 shootout loss.

The difference, Puputti said, is Finland doesn’t have a talent pool deep enough to draw upon to replace the players who have since retired. Another key factor is the U.S. and Canada having the resources to centralize their teams in one place during the four-month lead-up to the Olympics.

Other nations, by comparison, squeeze in a limited number of weeklong camps to fit around their players’ pro or college schedules. Finland was hampered further by losing practice time because of COVID-19 restrictions.

“I think you can see that they have been together a lot,” Finland captain Jenni Hiirikoski said, before being asked to compare Canada and the U.S. after facing both in three days.

“Canada is maybe a little more driving straight to the net. U.S. is maybe trying to make plays a little more,” Hiirikoski said. “But tough teams. Good teams. They are really good.”

Hilary Knight, a four-time U.S. Olympian, disputed the notion of the gap growing larger following a win in which the Americans outshot ROC 62-12.

“You know, 2019 isn’t too long ago. You saw that final,” Knight said. “Everyone's good at this tournament. And it’s wonderful because I think it’s a testament to the growth of women’s hockey.”

But only a few seemingly growing faster than others.