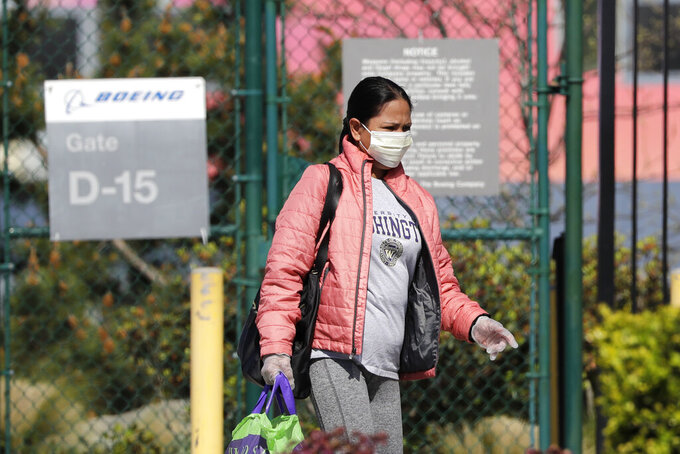 A masked worker departs a gate at a Boeing production plant Monday, April 20, 2020, in Renton, Wash. Boeing this week is restarting production of commercial airplanes in the Seattle area, putting about 27,000 people back to work after operations were halted because of the coronavirus. (AP Photo/Elaine Thompson)

SEATTLE (AP) — Boeing this week is restarting production of commercial airplanes in the Seattle area, putting about 27,000 people back to work after operations were halted because of the coronavirus.

The aerospace giant says it is taking extra precautions and has instituted comprehensive procedures at all of its sites to fight the spread of COVID-19. The new virus-slowing measures will include the use of face masks and other protective equipment, hand-washing sites, staggered shift times and employee wellness checks

Employees for the 737, 747, 767 and 777 airplanes were to return to work as early as Monday with most starting by Tuesday, officials said. Employees for the company's 787 program will return next Thursday and Friday.

Boeing’s shutdown went into effect March 25 after workers tested positive for the virus and a longtime inspector for the company died.

Boeing operates two commercial aviation production facilities in the Seattle area — in Everett and in Renton. They employ about 40,000 people combined.

Boeing spokesman Bernard Choi said the workers will start their days back at work with briefings about changes on the factory floor, where the company has put its new social-distancing rules in place.

Choi said some airlines and cargo carriers are still taking delivery of new planes and that Boeing expects some operators to accelerate the retirement of older planes in place of newer, more fuel-efficient ones during the pandemic.

Representatives from the machinists union at Boeing spent Monday walking through each of factories to see what safeguards had been put in place. Shop stewards were attending an online conference to learn about what safety issues they should watch for, said union spokeswoman Connie Kelliher.

The union also advised its members that they could use their “red cards,” which they carry behind their Boeing badges, to invoke contract provisions to stop work in case of imminent danger. Workers on the 777X used that provision to stop work March 18 after several employees on the previous shift had been sent home with symptoms.

“We are asking every member to take responsibility to ensure you are safe as you return to work,” the union said in an email to members. “While many changes in the work environment may be inconvenient or make your job more cumbersome, know that it is to prevent the spread of the COVID-19 virus, while also protecting you and your co-workers in the factory.”

Washington Gov. Jay Inslee, a Democrat, has said that aerospace manufacturing is an essential business, so the return to work for Boeing employees does not violate his stay-at-home directive affecting other businesses in the state.

“We expect that Boeing will undertake rigorous safety protocols as they move forward,” said Tara Lee, an Inslee spokesperson.

Boeing's finances and reputation were in crisis before the pandemic hit. Its best-selling plane, the 737 Max, has been grounded for more than a year after two deadly crashes, and the companies faces investigations by the Justice Department and Congress and lawsuits filed by relatives of the passengers who were killed in the crashes.

A halt in Max deliveries since April 2019 has sharply reduced Boeing’s cash. Last year, Boeing posted its first annual loss in 20 years as costs from the Max disasters topped $18 billion.

President Donald Trump and Wall Street analysts have said they expected Boeing would seek some of the $17 billion set aside for defense companies in last month’s $2.2 trillion virus-relief package. Boeing said it is waiting for guidelines from the Treasury Department before deciding whether to seek a loan.

Restarting the Boeing production lines will help Boeing’s large number of suppliers, many of whom have also been struggling from the shutdown of 737 Max production.

“It’s incredibly important for suppliers to start to see some pull and start to see a little cash flowing into the supply chain,” said Ken Herbert, an aerospace analyst with the Canada-based Canaccord Genuity wealth management and investment banking firm.

He added: “The longer you shut things down with the supply chain, the greater the risk is that they have a hard time starting back up again.”