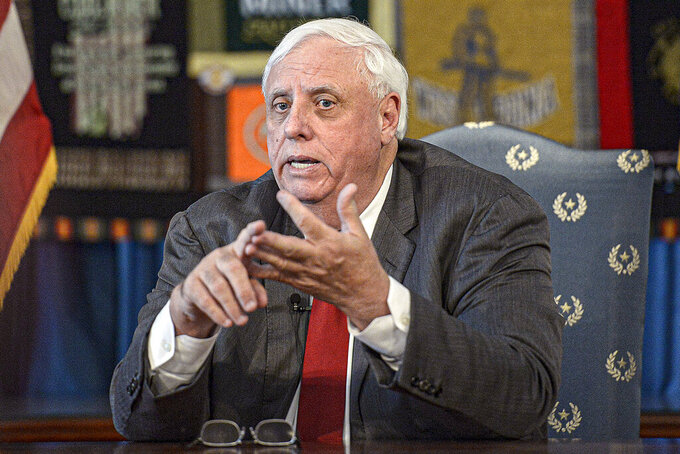 FILE - In this March 12, 2020, file photo, West Virginia Gov. Jim Justice speaks during a press conference at the State Capitol in Charleston, W.Va. Ben Salango, the Democratic candidate for West Virginia governor on Friday, July 31, 2020, said that he has agreed to debate Gov. Jim Justice five times before the November election and called on the Republican incumbent to sign on as well. (F. Brian Ferguson/Charleston Gazette-Mail via AP)

CHARLESTON, W.Va. (AP) — West Virginia Gov. Jim Justice said Monday the state must find a way to retest residents and staff at nursing homes and people at state correctional facilities for the coronavirus after recent outbreaks.

The Republican governor also floated the possibility at a news conference that visitations to nursing homes might have to temporarily stop.

Health officials over the weekend reported eight more deaths at the Princeton Health Care Center in Mercer County. The deaths occurred over the last few weeks, but weren’t officially reported due to personnel changes at the Mercer County Health Department, according to the Department of Health and Human Resources.

The Bluefield Daily Telegraph on Monday reported two more deaths at the nursing home on top of that, bringing the death toll there since the pandemic began to 13.

Justice said his office has been discussing the possibility of halting nursing home visitations for the second time this year.

“We do not have hospitals, especially in the southern part of the state, that can handle this problem,” Justice said. “We’re going to stay on top of it.”

“I don't know how we're going to do it because (of strained) testing supplies and testing availability," Justice said. "We need to develop plans right now to go back through and retest every single person that's in all the nursing homes again. And we need a plan to be able to go through and retest every person in our correctional facilities again. I know these are are daunting tasks.”

That would happen on top of the testing for thousands of students who are returning to college campuses this month. In Morgantown, students at West Virginia University will start moving back into residence halls Saturday for the fall semester, which starts Aug. 26.

Some WVU courses are being switched to online instruction. Dean of Students Corey Farris asked students in a letter Monday to make safe decisions on social behaviors that would allow the university to boost the amount of in-person classes as the fall semester progresses.

“House parties, going to bars and gathering in large groups will very likely increase community spread of COVID-19 and decrease the likelihood that we are back to normal anytime soon,” Farris wrote. “We will not tolerate these negative behaviors that could harm our community.”

About 23% of all statewide positive cases are from the 20-to-29 age group, far more than any others. Monongalia County, where the WVU Morgantown campus is located, has reported at least 928 positive cases, second to Kanawha County, whose 990 cases are up from 380 a month earlier. The two counties comprise nearly one-fourth of the total confirmed cases in the state.

Statewide, there have been at least 7,754 confirmed virus cases and 141 deaths.

For most people, the new coronavirus causes mild or moderate symptoms, such as fever and cough that clear up in two to three weeks. For some — especially older adults and people with existing health problems — it can cause more severe illness and be fatal.