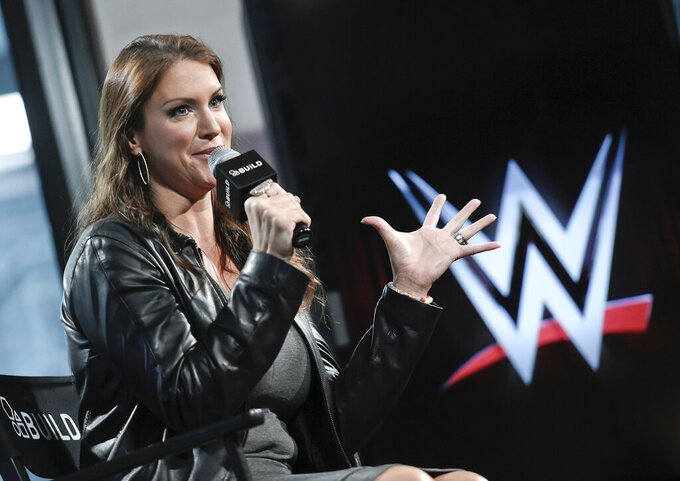 FILE - In this Friday, Oct. 16, 2015, file photo, American businesswoman Stephanie McMahon participates in AOL's BUILD Speaker Series at AOL Studios in New York. World Wrestling Entertainment is used to making headlines this time of year leading up to WrestleMania. But the company has more on its plate leading up to its showcase event on April 10 and 11, 2021. “Bringing back fans was needed, and we’ve been able to try things out that we have thought about but not had the chance,” WWE chief brand officer McMahon said. (Photo by Evan Agostini/Invision/AP, File)

World Wrestling Entertainment is used to making headlines this time of year leading up to WrestleMania. But the company has more on its plate leading up to its showcase event on April 10 and 11.

Two major moves will happen over the next six weeks — the WWE Network’s move to Peacock on March 18, along with the search for a new home for the ThunderDome, which is where “Raw” and “Smackdown” are being held due to the coronavirus pandemic.

WWE Network was launched in February 2014 and was ahead of its time because it changed its business model from relying on pay-per-view events in favor of an OTT (streaming media) service. The network originally partnered with MLB BAMTech to build the framework, which marked the first time that MLB Advanced Media had supplied all the hardware, software and built a network for another company.

BAMTech was eventually spun off by MLB into a separate company before Disney acquired majority ownership. Over the past couple years, WWE realized that trying to maintain the infrastructure could come at the expense of programming, bringing about the relationship with Peacock, which was a streaming service started last summer by NBCUniversal.

WWE president and chief revenue officer Nick Khan said discussions about WWE Network’s future had been happening since well before the pandemic.

“The big question internally was how much can you invest and keep pace with the technology? It would be a massive investment,” he said.

WWE Network averages 1.5 million subscribers, and will see a huge jump in its potential audience. Comcast said in its fourth-quarter financial report that Peacock had 33 million sign-ups.

“We can drop the price in half (WWE Network was $9.99 per month, while Peacock will be $4.99 per month) and add their technical support. Ultimately it became a no brainer, especially with their reach,” Khan said.

The move to Peacock also provides a financial boost for WWE after going from 310 live events in 2019 to 42 last year due to the pandemic. WWE will see an average of $200 million a year during the five-year contract.

WWE will shut down the existing standalone WWE Network app on April 4, meaning WrestleMania will be exclusively on Peacock. Comcast said in a release on Monday that the entire WWE Network archive should be on Peacock by mid-August.

With live road shows not expected to return until at least July, WWE still has not finalized a location for ThunderDome beginning in April. They are currently using Tropicana Field in St. Petersburg, Florida, but have to leave when the Tampa Bay Rays have their home opener on April 9.

WWE used the Amway Center in Orlando for four months, but had to move when the Magic started the NBA season. With Tampa and Orlando arenas still being used for NBA and NHL, it is possible the company could look to the college arenas at South Florida or Central Florida. Most of the wrestlers live in Florida due to WWE’s Performance Center being based in Orlando.

With screens around the ring able to accomodate 900-1,000 fans, the setup is like “Raw” or “Smackdown” live shows. The ThunderDome has also allowed WWE to experiment with different cameras and augmented reality graphics.

“Bringing back fans was needed, and we’ve been able to try things out that we have thought about but not had the chance,” WWE chief brand officer Stephanie McMahon said. “I’ve been blown away by all capabilities we have had with it and bringing it to life. We can apply everything that we learned to the future when we do have a merging of the physical and virtual fans.”

This year’s WrestleMania was originally scheduled for SoFi Stadium in Los Angeles, but it will take place at Raymond James Stadium in Tampa. Last year’s event was also scheduled for Tampa, but ended up moving to the WWE Performance Center due to the coronavirus.

WWE said Monday night that tickets for WrestleMania will go on sale next Tuesday, but did not announce what the capacity will be for the two nights. Attendance at last month's Super Bowl, which was also at the stadium, was limited to 22,000.

Los Angeles will get WrestleMania in 2023, while Dallas will host next year. McMahon said there were some logistical challenges and building commitments as to why Los Angeles must wait two years.

WrestleMania will be two nights again this year, but is scheduled to return to one night in 2022 and ’23. While the move to two nights last year proved popular, McMahon said trying to do that in the future might be more difficult due to the many events held during the week barring a pandemic.

“I suppose anything in life is possible, but this format is unique to the times,” McMahon said.