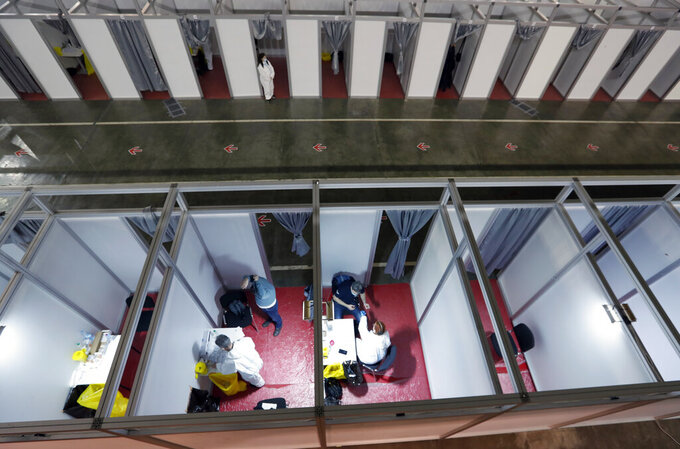 Serbia has received 1 million doses of a Chinese-developed coronavirus vaccine, and Hungarian and Chinese vaccine developers are cooperating, Xi said, according to the official Xinhua News Agency.

Hungarian Prime Minister Viktor Orban told the meeting he expects the first shipments of a Chinese COVID-19 vaccine to arrive in the country as early as next week.

“I have received very reassuring reports from our delegation, based on which our national regulator has issued (the Sinopharm vaccine) a permit for emergency use," Orban said and praised the "constructive attitude of the Chinese authorities, which has enabled us to sign the vaccine purchase agreement.”

Hungary was the first country in the EU to issue approval to the Sinopharm vaccine, and has purchased enough doses to inoculate 2.5 million people.

Beijing will “actively consider such cooperation” with other governments, Xinhua quoted the president as saying during the China-CEEC summit.

Sinopharm and another vaccine made by state-owned developers, Sinovac, have received conditional approval from China. Deals to supply millions of doses have been also reached with Turkey and at least eight other foreign countries.

Beijing is also trying to nurture relations with Central and Eastern European governments as part of efforts to expand markets for exports and for Chinese construction and other companies to operate abroad.

The focus on Eastern Europe through the China-CEEC group, also known as “17 plus 1,” has prompted unease among France, Germany and other Western European governments that Beijing is trying to make political inroads into the European Union.

Addressing Tuesday's meeting remotely, Polish President Andrzej Duda said the best way to help economies rebound after the pandemic would be to expand trade. Poland so far has not opted to secure the Chinese vaccines,

“We have this expectation that the cooperation within our 17+1 format will start bringing measurable and bilateral benefits in the area of economy, and first of all in the form of higher exports to China of goods and services from Central and Eastern Europe and in the form of a greater inflow of Chinese greenfield investments,” Duda said.

Meanwhile, Xi said China intends to import farm and other goods worth more than $170 billion from Central and Eastern Europe over the next five years, according to Xinhua.

Beijing is trying to develop new trade relationships and reduce reliance on the United States following a tariff war with Washington.

“We need to deepen agricultural cooperation,” Xi said, according to Xinhua.

Xi also expressed support for plans by Fudan University in Shanghai to establish a university in Hungary.