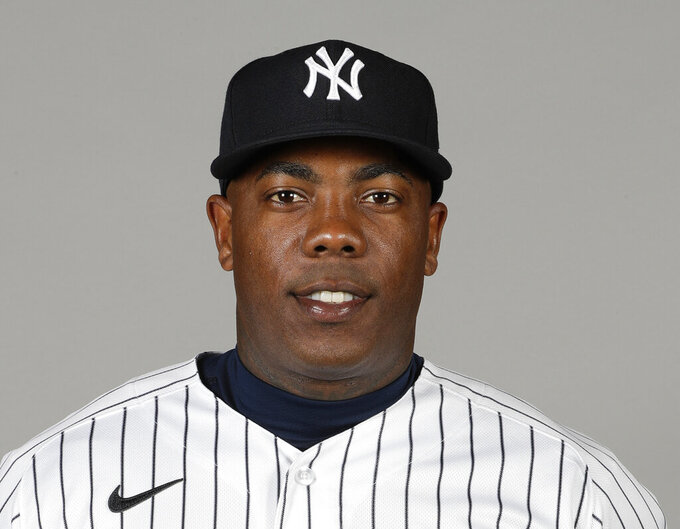 New York manager Aaron Boone said Saturday that Chapman “overall is doing well” but “will not be here for the foreseeable future.”

The AL East champions are scheduled to start the virus-delayed season on July 23 at Washington.

Hours after Chapman's diagnosis, Yankees slugger Aaron Judge was scratched from a simulated game with a stiff neck. The 2017 AL Rookie of the Year was set to bat second and play right field at Yankee Stadium but was taken out of the lineup shortly before first pitch.

Judge declared himself “game ready” earlier this week after being diagnosed with a broken rib in March. The 6-foot-7 slugger used the coronavirus shutdown to get healthy and had been swinging at full strength for at least a couple of weeks before reporting for preseason camp last week.

Boone said Judge's neck “locked up" but he doesn't expect it to be a long-term issue.

“Hopefully he can be in there tomorrow,” he said.

Chapman threw a bullpen session Tuesday, and Boone wouldn't comment on whether the left-hander had been at Yankee Stadium since. Boone said the team had done contact tracing, and no other players or personnel would be forced to isolate because of Chapman's positive test.

“We’re following all protocols,” Boone said. “We have not had any other positive tests. We adhere to all the contact tracing things. We feel like we’ve handled it and are handling it.”

“Again, you know, this is something that even moving forward, a positive test is probably going to come our way. It's about doing all the things that hopefully as a whole keep us safe and healthy,” he said.

Through the first week of monitor testing across all 30 major league camps, 17 out of 7,401 samples produced positives, a 0.2% rate far below the national average around 9%. Atlanta star Freddie Freeman, Kansas City catcher Salvador Perez, Colorado outfielder Charlie Blackmon and Texas slugger Joey Gallo are among the players to miss time due to COVID-19.

The list now includes the 32-year-old Chapman, a six-time All-Star with 273 career saves, including 37 last season when he had a 2.21 ERA.

New York is also without infielder DJ LeMahieu and right-hander Luis Cessa, who both tested positive prior to the start of preseason camp last week and are still isolating at home.

“It’s obviously just another reminder," Boone said, "that we have to be vigilant as far as wearing our masks when possible, the distance, the decisions we’re making away from the field, to best we can stay out of harm’s way.”

The Yankees will open their regular season against the World Series champion Nationals. If Chapman isn't back by then, Boone said left-hander Zack Britton would be a “natural guy” to replace him, but a formal decision hasn't been made. The 32-year-old Britton has 145 career saves, most coming with Baltimore from 2014-17.

“Britton has been an elite closer in this game for a long time," Boone said.

Right-handed starter Masahiro Tanaka played catch on the field Saturday, one week after he was hit in the head by Giancarlo Stanton's 112 mph line drive. Tanaka is still in concussion protocol and the club doesn't yet have a timeline for his return to the mound. Boone said Tanaka is responding well to treatment and testing.