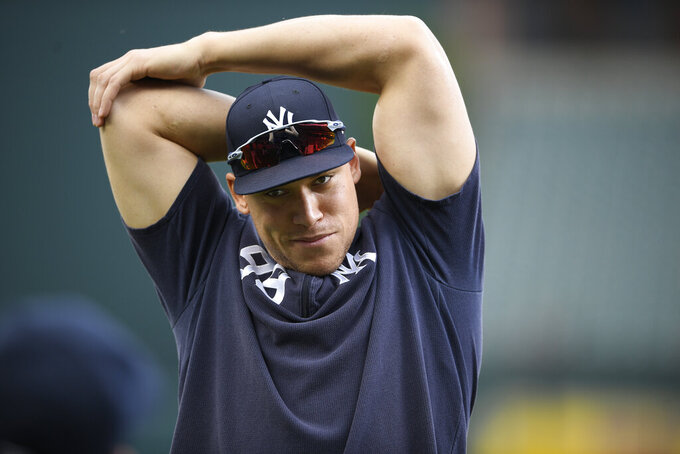 NEW YORK (AP) — Given an extra 3 1/2 months for their brittle stars to heal, the New York Yankees will closely monitor the conditioning of Aaron Judge, James Paxton, Aaron Hicks and Giancarlo Stanton ahead of a season unlike any other.

“We want these players to withstand a 60-game sprint over a 66-day schedule," Yankees general manager Brian Cashman said Tuesday on the eve of the first arrivals for “spring” training 2.0, already dubbed summer camp in Major League Baseball's marketing deal.

New York had been set to open March 26 at Baltimore with many of its key cogs on the injured list but expects all of them to be available when training resumes this weekend.

New York placed a big league record 30 players on the injured list a total of 39 times last season, then overhauled its training and conditioning staff.

“Ultimately, we’re in it to win it,” Cashman said, “and I think everybody else should be feeling the same way. And especially in a shortened season, I think it heightens the ability for anybody to really take a shot at the title. And so, therefore, how do they respond to this challenge remains to be seen, but I think it’s certainly going to open it up for a lot of opportunities for teams to take advantage of."

Because of the coronavirus pandemic, the Yankees are to play their rescheduled opener at World Series champion Washington on July 23 in what could be a matchup of new Yankees ace Gerrit Cole and Max Scherzer, who helped the Nationals beat Cole's Houston Astros in World Series Game 7 last fall.

New York is slated to go to Philadelphia before its home homer against the Phillies on July 29, according to information obtained by The Associated Press.

Judge did not play in any exhibition games due to discomfort in his right pectoral muscle and shoulder that he felt when swinging. The Yankees said March 6 that the right fielder had a stress fracture to his first right rib, an injury likely dating from a diving catch late last season. Judge later said he had a collapsed lung.

“We are very optimistic as of right now that maybe his proximation that he would be ready on opening day and in the lineup will ring true,” Cashman said. “So now it comes down to game reps and facing live pitching and seeing if he's in game shape.”

Paxton had surgery Feb. 5 to repair a herniated disk in his back and to remove a peridiscal cyst. The left-hander exited his final regular-season start, at Texas on Sept. 27, after one inning with what the Yankees said was a tight left glute muscle, then returned for three postseason starts.

After agreeing to a $324 million, nine-year contract, Cole heads a rotation that includes Paxton, righty Masahiro Tanaka, Paxton and lefty J.A. Happ. Lefty Jordan Montgomery could be the fifth starter.

Hicks, a switch-hitting center fielder, is recovering from Tommy John surgery on his right elbow on Oct. 31. Cashman said wants to evaluate his conditioning.

"I'm sure he feels he’ll be game ready by opening day, and I think that’s possible,” he said.

Stanton strained his right calf during defensive drills on Feb. 26.

“If you're shooting for the DH role by opening day, I think that's a possibility,” Cashman said before saying Stanton's left field availabiity “is to be determined.”

Cashman said some players may arrive late because of travel and the first official session for pitchers, catchers and injured players could be pushed back a day to Saturday.

Both batting cages and bullpens will be used. The Great Hall under the stands on the first base side will be the site of throwing programs. He is talking to opposing GMs about scheduling the three allowed exhibitions just before opening day, and the Mets are the most likely opponent because of the short travel distance.

Cashman is preparing for a season of changes on short notice.

“If we have a game tomorrow,” he said, “and your starter shows up and he has a temperature and all of a sudden has symptoms out of the blue right before the start, how do you adjust along the way?”