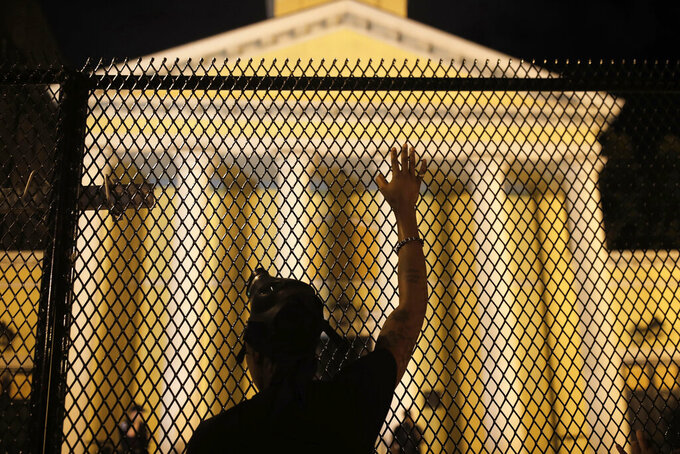 FILE - In this June 24, 2020, file photo, a protester calls out to police standing guard behind security fencing at St. John's Episcopal Church in Washington amid continuing anti-racism demonstrations following the death of George Floyd at the hands of police. A year later, racial justice retains its high profile across the country and discussion about increasing diversity in all aspects of American life continues, but advocates so far see little systemic progress. (AP Photo/Maya Alleruzzo, File)

One year ago, as protesters filled America's streets demanding justice after George Floyd’s murder by police, corporations and major philanthropists pledged an outpouring of donations for racial equity causes.

Billions of dollars were committed to new philanthropic initiatives. Billions more were directed to new business practices designed to aid minority communities. From poverty and police conduct to housing and education, the causes ranged broadly, with many donors looking to address the underfunding of nonprofits, especially in Black communities.

Those causes may yet receive the money they were pledged. Yet a tangle of complex tax rules and the absence of a framework to track funding for racial equity programs — or even a consensus on what a “racial equity program” is — have made it all but impossible to assess the overall effectiveness of the donations.

A year later, racial justice retains its high profile across the country, even if protests are now fewer and smaller. And though discussion about increasing diversity in all aspects of American life goes on and some changes have been adopted, advocates so far see little systemic progress.

“The events of last year have changed the way some foundations work,” said Aaron Dorfman, CEO of the National Committee for Responsive Philanthropy, a research and advocacy group. “You’re going to see higher raw-dollar figures and higher percentages explicitly intended to benefit Black communities and other communities of color. A lot of us who are proponents of racial justice and social justice are really hoping that this newfound commitment continues. It’s an open question as to if it really will.”

In a joint reporting effort, The Associated Press and The Chronicle of Philanthropy are examining how money pledged and donated in the name of racial justice has actually been used so far. Many nonprofits that received money after the Floyd protests channeled it into programs that serve minority communities.

Such successes are important, experts say, because even though philanthropic groups overwhelmingly say they want to help foster racial justice, many of them are unsure of exactly what to do.

“Foundations themselves told us they weren’t sure which changes were going to continue,” said Ellie Buteau, the Center for Effective Philanthropy’s vice president of research, who surveyed more than 800 foundations last summer about their plans for racial equity. “They did realize they have a lot more progress to make.”

Nearly 90% of the 236 foundations that responded to Buteau’s survey said they had launched programs to help make the response to COVID-19 more equitable, according to the Center for Effective Philanthropy’s “ Foundations Respond to Crisis: Toward Equity? ” report. More than 75% said they had initiated efforts to support nonprofits that serve communities of color.

Many of the foundations Buteau spoke with told her they were “trying to learn more about racism” and were trying to “self-reflect” about hiring and grantmaking practices. Fewer foundations, though, were making permanent structural changes.

“Increasing the diversity of the board was something that only a couple of foundations even raised with us,” Buteau said, adding that if a foundation is committed to being more diverse and inclusive, “it’s integral to have the board be more diverse — with more diverse thinking and experiences as well.”

For Dana Lanza, CEO of the Confluence Philanthropy, a network of foundations, donors and advisors that are trying to align their investment decisions with their values, the fact that more philanthropic organizations haven't taken that first step in the year after Floyd’s murder is worrisome.

“We can’t solve racial equity until we change the dynamics of who gets to make decisions,” Lanza said. “about how these enormous sums of capital are being deployed.”

“It’s all about opening people’s minds and opening their hearts,” she said.

With that in mind, Confluence Philanthropy created the 2020 Belonging Pledge last June, which asked investors to commit to discuss racial equality at their next investment committee meeting. It’s a first step that has drawn 185 signatories, including Rockefeller Philanthropy Advisors and The California Endowment, which have $1.8 trillion in assets under management.

“I think it was a wake-up call for philanthropy,” Lanza said. “After all these decades of grantmaking on racial justice and racial equity, how could this be where we are?”

The pledge, which will likely be expanded this fall, even raised issues among those that didn’t sign it, including an investment firm working with foundations that manages close to a trillion dollars and "wanted to sign the pledge, and they got pushback from management because they realized that they hadn’t done a demographic survey internally in years,” Lanza said.

She added, “You can’t have a racial justice grantmaking program if you’re not practicing racial equity in the investment practices of your endowment.”

Starting the process in this way seemed more productive than looking at the broader issues exemplified in Floyd’s murder, including the prevalence of police brutality.

“Black Lives Matter was trying to wake people up for years about this issue," Lanza said. "I was telling friends and colleagues for a long time, ‘This is incredible and it’s scary.’ And people just didn’t want to talk about it.”

For many people and foundations, Floyd’s death and the protests that followed thrust the issue to the center of public consciousness for the first time.

Studies by the National Committee for Responsive Philanthropy show that specific discussions and goals tend to make an impact.

“Being intentional in your strategies is the best way to do this kind of equitable grantmaking,” Ryan Schlegel, the committee's research director. “While it’s great that a lot of community foundations, for example, fund around poverty in their community, it’s really important that we also ask them ‘OK, what are you doing for Black people specifically?’ ”

It is important, especially now, for all sorts of groups to work on fostering racial justice from a variety of angles, experts said.

“There is a really important role for Black-led groups to play,” Dorfman said. “They will identify different solutions to the pressing problems than non-Black-led organizations might. They have been underfunded for so long that I think it’s really important at this time to be identifying those organizations to move resources to them.”

In a report, the National Committee for Responsive Philanthropy found that between 2016 and 2018, the last three full years for which data was available, funding earmarked specifically for Black communities represented just a tiny sliver — roughly 1% — of the grants made by 25 community foundations. That was true even though 15% of the population of the cities these foundations served was Black.

Though several foundations complained that the report did not count funding that helped Black communities if it wasn't explicitly categorized for them, few questioned the report's finding that these communities have been underfunded.

Citing the needs of people of color, Dorfman said:

"Donors should invest in those kinds of groups to really drive change. This is a moment of both urgent needs and great opportunities to reshape society, and so higher spending is warranted.”

To achieve racial equity gains, those investments should be directed into sustainable projects in challenged communities.

“We really need groups that are grounded in the local communities to be building their own capacity, because the challenges facing our society aren’t going away,” Dorfman said. “An important piece of that puzzle is funding Black-led organizations.”