A year into pandemic, some in media tell individual stories 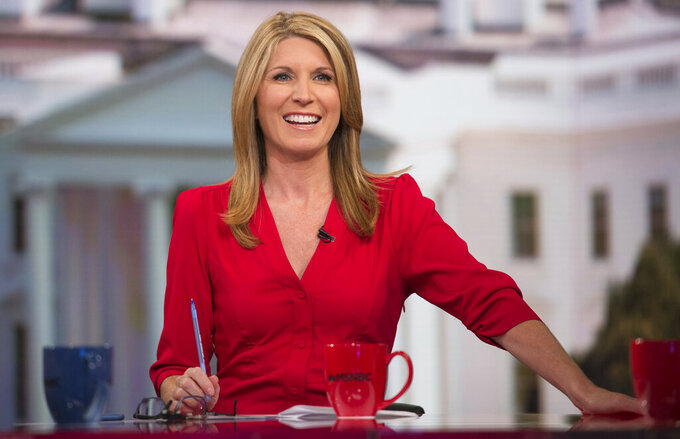 This image provided by MSNBC shows Nicolle Wallace on the set of "Deadline: White House." (Nathan Congleton/MSNBC via AP)

NEW YORK (AP) — The emotional center of Nicolle Wallace's MSNBC show often comes at the very end, when statistics are set aside to tell the story of a life cut short by COVID-19.

The “Lives Well Lived” feature, which is being expanded into a prime-time special on Wednesday to commemorate a year since the pandemic altered America, is one of a handful of continuing efforts in the media to give a face to suffering.

Every Friday, the “In Memoriam” feature on PBS' “NewsHour” profiles five Americans from all walks of life who died of COVID-19. The New York Times usually does one obituary a day of a virus victim under the “Those We've Lost” banner. Several CNN shows make it a point to tell individual stories.

All consider it important to continue, particularly at a point when people are getting weary of the story and restrictions on their lives.

“The main goal is to remind people that people who are loved are dying of this disease,” said Frank Carlson, a “NewsHour” producer who puts together that show's segments, learning of victims through viewers and local obituaries. “It may be a cliche, but a number doesn't really convey it in the same way.”

Wallace is somber telling the stories, displaying family snapshots and details culled from interviews with family and friends about what made each person unique.

“They're all heartbreaking,” Wallace said. “But the moms who die younger than me are just searing. We've done a few children, and it turns out cable hosts can't get through these. So we don't do a lot of those.”

For the Times, the obvious precedent is the memorable “Portraits of Grief” thumbnail sketches of people who died in the Sept. 11, 2001 terrorist attacks.

The Times tells longer stories for COVID-19 victims, generally 400 to 500 words but occasionally stretching beyond. On Monday, for example, the Times profiled Monica Alexis, an 83-year-old woman who had long worked as a nurse's aide, and died of the virus in a San Antonio hospital.

“These are people we wouldn't normally write obituaries about,” said Daniel J. Wakin, senior editor at the Times. “I wanted to give them the full treatment, both for the sake of telling a good story and for the sake of giving these people their due.”

There's no ending date for the obits, generally run online and collected in the print newspaper once a week.

“People are still dying in large numbers,” Wakin said. “The impetus for doing it remains the same.”

Wallace worked in former President George W. Bush's White House in the aftermath of Sept. 11, and recalled the unified national effort to honor those who were lost. When she began “Lives Well Lived” last April, she couldn't help but notice a difference. She believes the Trump administration didn't want to give much attention to people dying of COVID-19 because it reflected poorly on them.

People were dying, alone and anonymously.

“It just became an overwhelming number of people lost, every single one of them blowing up an entire family and losing a loved one in the most unresolved way — not being able to hold their hand, and not being able to honor them in the sort of ritual that their faith and family believed in,” she said.

“It just seemed like the smallest thing we could do.”

What the news organizations are doing is “so, so needed,” said grief counselor David Kessler. The author of “Finding Meaning: The Sixth Stage of Grief” said the first time he set up an online grief session for families of COVID-19 victims, some 1,000 people showed up.

Not only do many of these people die in relative invisibility, unable to have their family around, but some survivors have been attacked for political reasons, by people who want to minimize the coronavirus.

“No one has ever had a loved one die of cancer and heard someone say, ‘you know, I don’t believe in cancer,'" Kessler said.

As hard as it is for him to hear the stories, “imagine if it's your mom or dad,” he said.

Callahan said he was reading through Twitter comments about some of the PBS “In Memoriam” features, and saw someone write, “nobody cares.” But he said that's relatively rare.

The MSNBC “Lives Well Lived” special, scheduled for 8 p.m. Eastern on Wednesday, will feature some of the stories that Wallace has told, as well as a feature on front line workers. CNN is airing a national memorial service for pandemic victims, hosted by Jake Tapper, at 11 p.m. Eastern.

Wallace said she hoped the program would be aspirational, and a reminder of the importance of taking precautions against COVID-19 because people are still dying.

“We're trying to create a national memorial where there isn't one,” she said.