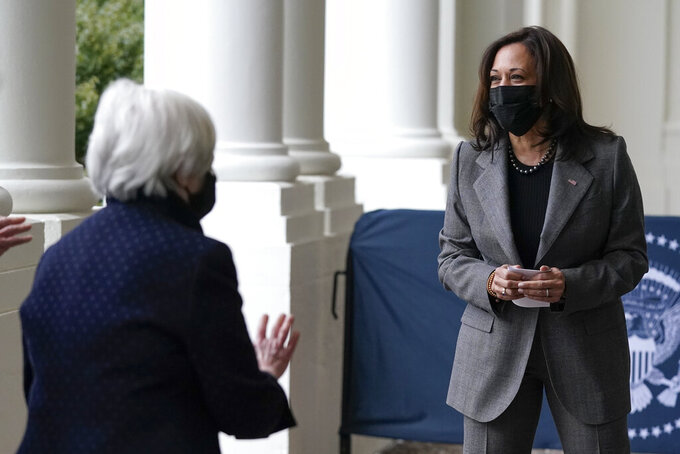 WASHINGTON (AP) — Janet Yellen, sworn in Tuesday as the nation's 78th Treasury secretary and the first woman to hold the office, said in a message to the department's 84,000 employees that they would play a major role in addressing the country's biggest economic challenges.

“In addition to the pandemic, the country is also facing a climate crisis, a crisis of systemic racism and an economic crisis that has been building for fifty years,” Yellen said in her message. “I believe our department can play a major role in addressing each of these crises.”

She was sworn in by Vice President Kamala Harris, the first woman elected to the position, at a ceremony performed outside on the East Wing entrance to the White House in view of the department Yellen will now lead. Yellen’s husband, George Akerlof, winner of the 2001 Nobel prize in economics, and their son Robert, also an economist, were present for the brief ceremony.

In her message to Treasury employees, Yellen said she would be conducting a virtual listening tour in the next few weeks to meet with employees to get their views on how the department can do a better job of addressing the crises facing the country.

“We must help the American people endure the final months of this pandemic by making sure they have roofs over their head and food on the table,” Yellen said. “Then, we must assist them in getting back to work safely.”

Yellen said it will be important to then turn to addressing what she called a K-shaped economy where some people have done very well with “wealth built on wealth while certain segments of the population fell further and further behind."

Treasury said that Yellen spent her first day on the job meeting virtually with her advisers and career employees as well as getting an update on President Joe Biden's $1.9 trillion COVID-19 relief plan.

Yellen became the third of Biden's Cabinet nominees to win Senate approval on a vote of 84-15 late Monday. All of the no votes came from Republican senators.

The administration has emphasized the need to get its nominees approved quickly given the threats facing the country from a global pandemic and a slumping economy.

Yellen is expected to play a key role in gaining congressional approval of Biden’s relief package, which is running into stiff opposition from Republicans who believe the price tag is too high.

Schumer said Yellen has a “breathtaking range of experience” and support for her nomination reflected “just how well suited she is to manage the economic challenges of our time ... particularly during this moment of economic crisis.”

Before the approval by the full Senate, Yellen had received unanimous backing from the Senate Finance Committee. Republicans on the panel said they had policy disagreements with Yellen and the Biden administration in such areas as raising taxes on corporations and the wealthy, but believed it was important to allow Biden to assemble his economic team quickly.

At her confirmation hearing before the Finance Committee last week, Yellen argued that without prompt action the nation faced the threat of a “longer, more painful recession.” She urged quick action on the relief package that would provide an additional $1,400 in payments to individuals making below $75,000 annually as well as providing expanded unemployment benefits, further aid for small businesses and support for cities and states to prevent layoffs.

But many GOP senators have pushed back on the proposal. Sen. Charles Grassley, R-Iowa, told Yellen that Biden’s plan represented a “laundry list of liberal structural economic reforms.”

As Treasury secretary, Yellen, 74, will occupy a pivotal role in shaping and directing Biden’s economic policies. She enters the Treasury job after many years serving in other top economic jobs, including as the first woman to serve as chair of the Federal Reserve from 2014 to 2018.

An economist by training who was a professor at the University of California at Berkeley, Yellen will represent the Biden administration in global financial affairs and lead a sprawling department whose responsibilities cover overseeing IRS tax collections, making policy on banking regulations and serving as the administration’s contact with Wall Street.

She drew high marks for her stewardship at the Fed, where she employed record-low interest rates and massive bond buying, two policies begun by her predecessor Ben Bernanke, to support the economy as it struggled to emerge from a deep recession. She will now confront a new crisis brought on by a global pandemic.