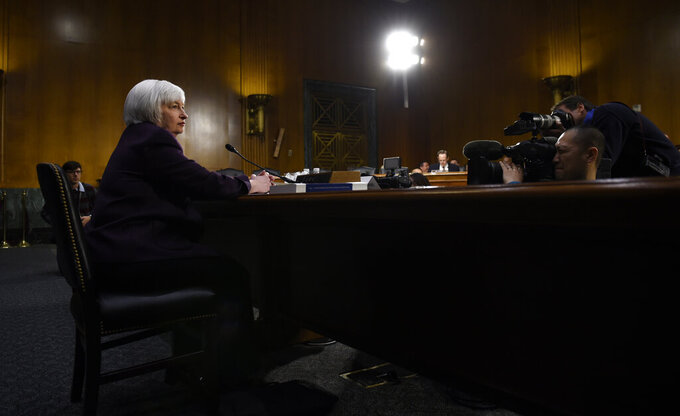 WASHINGTON (AP) — On a cold, gray February afternoon, Treasury Secretary Janet Yellen stepped out of the West Wing wrapped in a puffy black parka and clutching a folder of documents, seemingly oblivious to the Washington custom of having an aide schlep the paperwork.

Viewed as an outsider to partisan politics, she now has a place in President Joe Biden’s inner sanctum, a Ph.D. economist who does the reading, knows the numbers and treats her staff as peers rather than underlings.

Yellen had been at the White House to strategize about how to push through President Joe Biden’s proposed $1.9 trillion coronavirus relief plan — a package that could determine how quickly the U.S. economy heals, how the Democrats fare in the midterm elections and just how much Americans can trust the government to solve the nation's toughest problems.

The House passed the package Saturday, sending it to the Senate.

As a former chair of the Federal Reserve, Yellen carries the authority of a public servant who has already helped steer the economy back to health once and now has been called back at age 74 for an encore after former President Donald Trump declined to offer her another term as Fed chair.

She is framing the need for the giant COVID-19 bill in starkly human terms, and her credentials are enough to give pause to Republican lawmakers and other economists who argue the package is so big it would overwhelm the economy.

“Yellen is uniquely poised," said Brian Deese, director of Biden’s National Economic Council. “She has as much experience and expertise of addressing the challenges of our time as any living economic policymaker today.”

Even in a Washington riven by partisanship, Yellen is held in high regard by members of both parties. As president of the San Francisco Fed, she sounded the alarm about the housing bubble before it fully burst in 2008. She helped nurse the economy back to health as the Fed’s vice chair and then as chair sustained the longest expansion in U.S. history.

Yellen's hard-won credibility is now staked on administering a dose of financial adrenaline and mass vaccinations that can bring back the 9.9 million jobs lost to the pandemic within the next two years, an unprecedented burst of hiring.

Biden's proposed stimulus package is broad, with its $1,400 checks to eligible Americans and nearly $500 billion for schools and state and local governments. But Yellen believes that more narrowly targeted measures on unemployment benefits or food aid might miss deserving people like the mother who was forced to leave her job because the pandemic closed schools and childcare centers.

“The truth is there are pockets of pain that go beyond what can be reached in those highly targeted ways,” she said at a recent New York Times conference.

The Biden campaign first contacted Yellen about ideas for financial relief in May, back when she believed her career in public service was over.

After the Fed, Yellen joined the Brookings Institution and gave speeches on economic policy to major companies that paid her in excess of $7 million. She recommended that because of low interest rates Biden could embrace a large aid package financed by debt.

It was a suggestion that brought her more fully into Biden’s orbit. If Biden based his politics on empathy for hurting Americans, Yellen could supply the economic rigor to show how that empathy could be translated into policies to boost hiring and ease economic pain.

Gene Sperling, a former director of the National Economic Council for Bill Clinton and Barack Obama, said both Biden and Yellen had a feel for how long-term job loss could crush people emotionally and economically.

“That is a place where both of their hearts merge with the lessons and experiences of previous deep recessions,” Sperling said.

Sperling worked with Yellen during the Clinton administration when she was chair of the Council of Economic Advisers, a post that focuses on research. But for all the seriousness of the equations and charts, Yellen was game for indulging in some silliness.

Sperling remembered one morning in 1999 when Yellen was debating how to describe a strong monthly jobs report at a meeting of senior White House officials. Sperling suggested that the pair do a little hallelujah dance. And they did.

Yellen received her doctorate from Yale University when few women were becoming economists. She juggled parenthood with her work as a professor at the University of California, Berkeley, in the 1980s, helping to build her son’s pinewood derby car as a colleague fed economic data into a computer.

For a woman often perceived to be standing alone, Yellen has long been part of a team since her time at the Fed. She meets frequently with Biden, participates in daily White House senior staff meetings and speaks with Deese several times a week.

What Yellen did at the Fed — and now appears to be doing at Treasury — is elevating the importance of workers, taking a fuller view of the economy at a cabinet agency that once was perceived as largely the domain of whisperers to Wall Street.

“She’s not antibusiness, not anti-Wall Street," said Claudia Sahm, a former Fed staff economist. “But she has brought workers and employment front and center.”

Critics of the plan, notably including Harvard's Larry Summers, also a former treasury secretary, say the price tag is more than the economy needs and could undermine other Democratic priorities such as infrastructure. In an online debate, Summers said he has enormous respect for Biden and the “serious and able people” on his economic team. Yet he has misgivings.

“This goes way beyond what is necessary to meet the absolute imperative of relief,” Summers said.

But Biden and Yellen are undaunted, intent on steering the U.S. economy in a new direction — one that puts a premium on job growth, relies on low interest rates to borrow and seems at odds with the previous administration's reliance on the stock market as a primary measure of success.