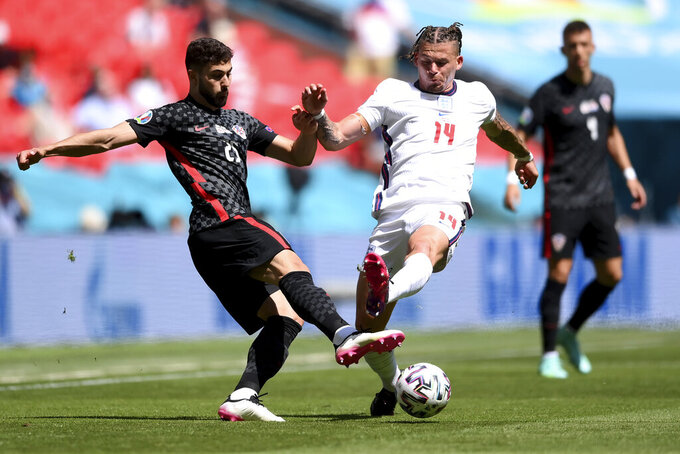 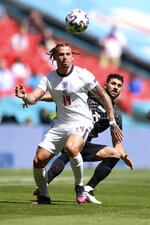 LONDON (AP) — The full range of Kalvin Phillips was on display at the European Championship: Tenacious pressing, impressive technique and passing vision.

In England’s midfield against Croatia, Phillips had the look of an accomplished and experienced international player. Not one who a year ago was playing in the second division having never been called up for his country, not even for the youth teams.

Even if Euro 2020 had been played on time, England coach Gareth Southgate was considering drafting the Leeds midfielder into the squad for the first time.

The pandemic-enforced delay to the tournament gave Phillips the chance to win promotion with Leeds — a club based in the historic English county of Yorkshire — and make his international debut even before his first Premier League game.

Nine months later, Phillips was a logical choice to start alongside Declan Rice in England’s midfield for the team’s Euro 2020 opener against Croatia. In only his ninth England appearance, Phillips played the full 90 minutes — with his most significant contribution coming in the 57th by setting up the only goal.

“Whenever I get a chance to be on the ball, I just think to myself ‘Don’t give it away,’” Phillips said Monday. “If there’s a pass I can play forward, I try to give it somebody else who is in a better position.”

From a deep position — not neglecting his defensive shield duties — Phillips darted forward into space to receive the ball on the right flank. Cutting past an opponent who went sliding to the turf, Phillips slipped the ball through for Raheem Sterling to apply the finish.

“He has been brilliant,” England captain Harry Kane said. “He has just come off the back of a shoulder injury as well, he has been good in training and working hard to be fit for the first game.

“Obviously he was selected and did a fantastic job and there were a few guys out there playing their first game for England in a major tournament and they did their country proud.”

The athleticism that impressed Southgate came in humid conditions at Wembley Stadium in north London.

“Kalvin is a fabulous boy to work with, so unassuming,” Southgate said. “I thought his performance was outstanding. Two passes in the first half in behind the defense were top level and the contribution for the goal summed his day up.”

Controlling the midfield was particularly necessary after England was outclassed in that territory in the World Cup semifinal loss to Croatia in 2018. There was no sense of being overawed facing Luka Modric and Mateo Kovacic this time.

“Every time Modric or Kovacic were dropping, trying to go away from them, he was not afraid of pushing up and trying to press higher,” said former Chelsea, Real Madrid and Tottenham manager Jose Mourinho, who is working on the tournament for talkSPORT radio. “I don’t remember him missing a pass in a dangerous building up area.

“I think he was very, very good and when you see one of these young guys appearing in these big stages and performing the way he did, it is fantastic.”

His passing accuracy of 94% was more than any other England player in the Group D match, drawing those comparisons with World Cup-winning Italy midfield maestro Andrea Pirlo.

“We know that we are asking him to play in a slightly advanced position than that he plays at his club,” Southgate said. “But he knows he has the technique to do that. He gives us a bit more solidity in midfield and allows us to effectively play four attacking players with Mason (Mount) in midfield as well.”

In Southgate’s eyes, the tutelage of Marcelo Bielsa has helped the 25-year-old Leeds academy graduate develop even more over the last three seasons as more than just a holding midfielder.

“Being able to work with the coach he has and having a season playing in the Premier League will have given him confidence but all the attributes are there," Southgate said. "For us he’s a very good footballer. High performance, low maintenance.”