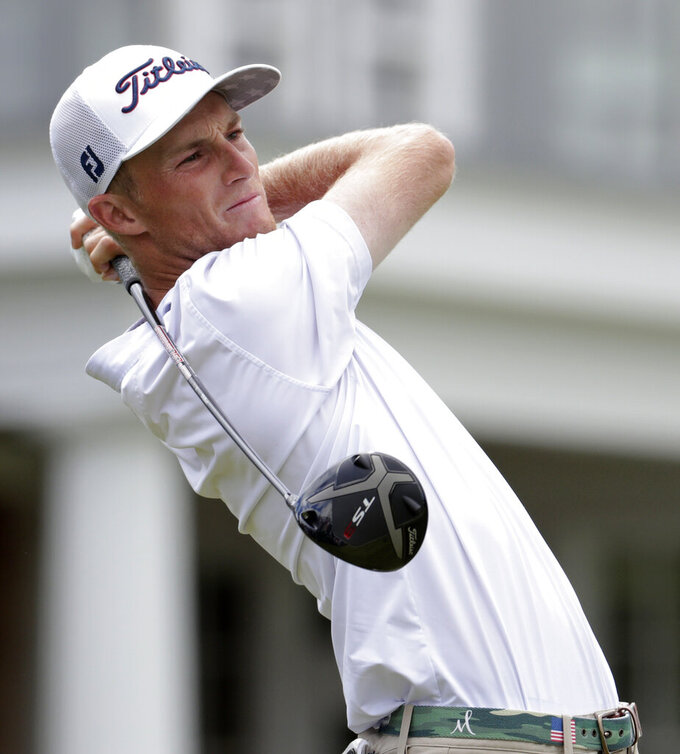 FILE- In this June 15, 2018, file photo, Will Zalatoris plays his shot from the 14th tee during the second round of the U.S. Open golf tournament in Southampton, N.Y. Zalatoris will have a PGA Tour card, the goal he set for himself at the start of the year. Still to be determined is when that happens. (AP Photo/Julio Cortez, File)

Will Zalatoris will have a PGA Tour card, the goal he set for himself at the start of the year. Still to be determined is when that happens. Equally fascinating is how.

Zalatoris had a pair of top-10 finishes to start the Korn Ferry Tour season when the COVID-19 pandemic shut down golf for three months. Because of the shortened season, the PGA Tour decided to extend the Korn Ferry season into 2021, meaning no one would get a PGA card until next fall.

Zalatoris kept sharp while playing at home in Texas during the pandemic and has been at his best since golf's return. His victory in Colorado was among 11 consecutive finishes in the top 20, eight of those in the top 10. He leads the Korn Ferry with 1,876 points. He is a lock to get his card — next year.

Now there are other opportunities.

Zalatoris tied for sixth in the U.S. Open at Winged Foot. On a sponsor exemption last week in the Dominican Republic, he closed with a 65 to tie for eighth, which got him a spot this week in the Sanderson Farms Championship in Mississippi.

He has 185 FedEx Cup points, leaving him 103 points away — the equivalent of a two-way tie for fifth — from special temporary membership on the PGA Tour. That would allow Zalatoris unlimited sponsor exemptions.

He already has an exemption for next week in Las Vegas, which would be nine tournaments over the last 10 weeks, including a draining week at Winged Foot.

“At this stage of where I'm at, I can't take a week off,” Zalatoris said. “Hopefully, we'll keep on running.”

If he gets it done, Zalatoris likely can play a PGA Tour schedule next year without being a full PGA Tour member, unless he were to win.

The advantage of being in the big leagues is obvious, and the point was brought home at Winged Foot. For all his success on the Korn Ferry Tour this year, Zalatoris has earned $403,978. He made more than that — $424,040 — for his two-way tie for sixth in the U.S. Open.

Also in Mississippi is Davis Riley, playing in his home state. Riley might be even closer to PGA Tour membership than Zalatoris. He has two wins this season on the Korn Ferry Tour. And because the “season” now covers two years, another win gives Riley an instant promotion to the PGA Tour.

Jared Wolfe, who won the Wichita Open last week, also has two Korn Ferry Tour wins. He is playing the Savannah Golf Championship this week. The final Korn Ferry Tour event for 2020 is next week in Orlando, Florida.

OF LIFE AND GOLF

Jay McLuen led the Monday qualifiers for the Sanderson Farms Championship in Mississippi, which he proudly noted on Twitter by writing, “Every time I think it’s coming to an end I go do something like shoot 66 and qualify for the PGA Tour event in Jackson.”

He could have been talking about golf of life. Few players have been through more in the last couple of years.

In an interview with pgatour.com, McLuen said he was on the couch with his children in October 2017, two days before going to Q-school, when he had a heart attack. His wife called 911 and paramedics revived him at home and in the ambulance. He now has a pacemaker and has not any problems since.

Then in April, he was using a brush hog to clear land at home in Georgia when he ran over some barbed wire. He shut down the tractor and raised it up to loosen the wire. As his wife crawled underneath to hand him wire cutters, the hydraulics failed and the tractor landed on them, pinning his wife to the ground.

“She couldn’t breathe. I was awake, but I couldn’t move,” he said. “I called for my little girl to go get our neighbors. They came and were able to pick it up with their tractor and get it off of us. When I looked over, she was purple, she wasn’t breathing. Luckily, our neighbor knows CPR and he told me what to do.”

He said she was in full cardiac arrest when the ambulance arrived and had a collapsed lung.

“But she made it through all that and is back to work,” he said.

The women now get their chance to play in Saudi Arabia.

The first Ladies European Tour event in Saudi Arabia will take place Nov. 12-15, the same week as the Masters. The Saudi Ladies International will be a 72-hole event with a $1 million prize fund. It will be followed by the Saudi Ladies Team International, a pro-am that will be Nov. 17-19 with a $500,000 purse.

Both will be played at Royal Greens Golf Club, the first international sports events in Saudi Arabia since the COVID-19 pandemic.

The 72-hole event originally was scheduled for March.

For someone who turned pro a month before his 16th birthday, Joo-hyung Kim already is well traveled.

He was born in South Korea, moved to China as an infant and then spent seven years in Australia learning to speak English. From there, Kim moved to the Philippines for six years and he fell in love with golf. When he turned pro, he moved to Thailand while playing the Asian Development Tour.

One other thing about Kim worth noting: He goes by Tom.

“It was actually Thomas,” Kim said last week in the Dominican Republic. “I got it from ‘Thomas the Train’ when I was young. As I grew older, some people started calling me Tom and I thought it was just shorter and more simple.”

Kim said he had a lunchbox and toys from the movie, and now even his family calls him Tom.

He also is worth some attention. Kim won twice on the ADT at age 17, won the Panasonic Open India on the Asian Tour and earlier this year at the Korean PGA Gunsan Open captured his fourth career victory. That moved him inside the top 100 in the world for the first time, landing a spot in the PGA Championship at Harding Park.

In two PGA Tour starts, he tied for 67th in the Safeway Open and tied for 33rd in the Corales Puntacana Resort Club and Championship. He is not in the field at the Sanderson Farms Championship.

His long-term goals would not be described as modest.

“I really would love to be world No. 1,” he said. “I would obviously love to play on the PGA Tour, win all four majors, be in the Golf Hall of Fame, just those big things I always would love to achieve. I've had that mindset ever since I started playing golf, so it's always with me.”

Anirban Lahiri did not make a return flight home from the Dominican Republic, instead booking a seat on the PGA Tour charter to Mississippi even though he was not in the field. He tied for eighth to play his way into the Sanderson Farms Championship. “This is going to be good for my confidence because I backed myself to do this,” he said. ... Renee Powell has been selected to be U.S. captain for the Junior Solheim Cup team next year in Ohio. ... The last two runner-up finishers in the Sanderson Farms Championship went on to win for the first time on the PGA Tour later in the season — Corey Conners in 2018 and Sungjae Im last year.

Hudson Swafford was the seventh PGA Tour winner this year ranked outside the top 200 in the world.

“I think we're too far down the road to do anything drastic. It went on too long and too far to bring the game to where it was in the mid-90s.” — Rory McIlroy on what golf should do about distance.