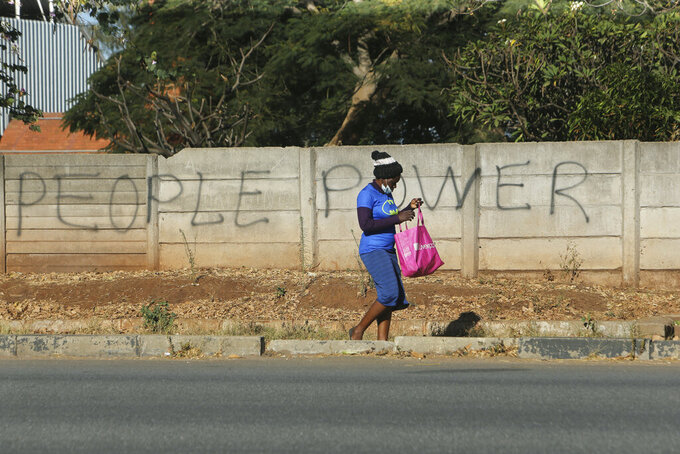 A woman walks past a wall with graffiti in Harare, Wednesday, June 10, 2020. Authorities in Zimbabwe have started publicly naming people who have escaped from quarantine centers and urging the public to report them to prevent the spread of the coronavirus. Zimbabwe has seen a rise in confirmed cases of COVID-19 in recent days, with most recorded at quarantine centers. (AP Photo/Tsvangirayi Mukwazhi)

HARARE, Zimbabwe (AP) — Authorities in Zimbabwe have started publicly naming people who have escaped from quarantine centers and urging the public to report them to prevent the spread of the coronavirus.

Zimbabwe has seen a rise in confirmed cases of COVID-19 in recent days, with most recorded at quarantine centers.

More than 3,700 people are being kept in the quarantine centers after entering the country, mostly from neighboring South Africa and Botswana, but dozens are fleeing the confinement complaining of filthy, unhygienic conditions and charging infections are spread at the quarantine areas.

Millions of Zimbabweans left the country for South Africa and other countries to escape political and economic turmoil over the last two decades, but some are returning home during the coronavirus outbreak.

New arrivals at the quarantine centers will have to surrender their passports and other identity documents to make it easier to trace them if they escape, Zimbabwe's COVID-19 chief coordinator Agnes Mahomva announced Wednesday.

The government is publishing names of escapees, some with confirmed positive results of COVID-19, in newspapers and on social media. The health ministry is also asking people to report those who cross the border illegally and don't go to quarantine centers.

Some communities have been reporting such people to authorities in a bid to protect themselves. Those who are turned in to authorities are returned to the quarantine centers.

Zimbabwe has reported 314 cases of COVID-19, according to figures released Wednesday by the Africa Centers for Disease Control and Prevention. The figures have risen from the 56 recorded toward the end of May. Most of the new cases have been reported at the quarantine centers. Information minister Monica Mutsvangwa on Tuesday said this showed the effectiveness of the country’s mandatory 21-day isolation regime.

But doctors and other health professionals charge that the conditions at the centers are deplorable. They also warn that the lack of social distancing and adequate screening and testing could result in people becoming infected with the coronavirus at the centers.

A judge last week ordered the government to improve conditions at the quarantine centers after a doctors group pressed a lawsuit in which it said the conditions are putting “seriously at stake” the lives of people held there, health professionals and security agents enforcing the isolation.

Hundreds at the centers are forced to share “some few dirty ablution and bathing facilities while others have no access to medication,” said the Zimbabwe Association of Doctors for Human Rights in its court application.