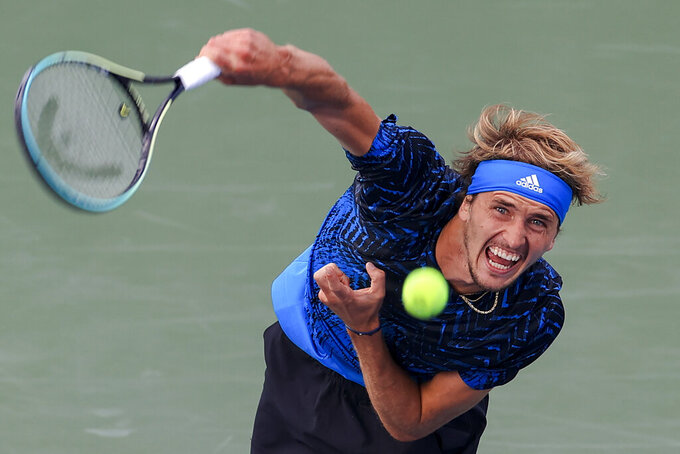 NEW YORK (AP) — Olympic tennis gold medalist Alexander Zverev again denied abuse allegations made by a former girlfriend and said Friday he would support the introduction of a domestic violence policy by the men's pro tour.

Zverev — a 24-year-old German who was the runner-up last year at the U.S. Open, which starts Monday — issued a statement about the matter and then briefly addressed it at a pre-tournament news conference.

The former girlfriend, Olga Sharypova, first made the accusations last year and provided a new, detailed account this week via a Slate.com article.

Zverev was granted a preliminary injunction in Germany against the author and publisher of the allegations.

"The court followed our arguments and states, the accusations are defamatory and false,” his statement said.

No action was sought against Sharypova.

Sharypova, a former tennis player, alleged last year that Zverev attempted to strangle her with a pillow and hit her head against a wall at a New York hotel before the U.S. Open in 2019. She said she feared for her life at the time.

Zverev has denied the allegations.

Slate defended its report in a statement later Friday.

“Today we were informed that Alexander Zverev started legal proceedings in Germany against Slate following our report on alleged domestic abuse. Though Slate does not comment on pending litigation, we stand by our fair and accurate reporting based on multiple sources and interviews,” Slate spokesperson Katie Rayford said.

The ATP said last weekend it would begin an independent review of its safeguarding policies, which it said is expected to include recommendations pertaining to domestic violence.

On Friday, Zverev said he would favor a policy.

“It’s going to get sorted in these kind of situations,” he said. “I think it’s good that the ATP is kind of renewing their rules a little bit because they’ve been there since the ’80s and nothing has been changed in a way.”

Zverev lost to Dominic Thiem in the 2020 final at Flushing Meadows, falling in a fifth-set tiebreaker after blowing a two-set lead.

Zverev followed up his gold medal at the Summer Games by winning a hard-court title in Cincinnati this month.